Allan Redford, 57, claims bosses at Shopmobility in Centre West told him he had been banned for life after he was caught on CCTV exceeding the speed limit on one of their electric scooters. 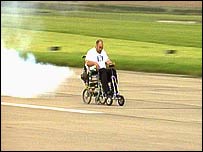 He has denied the charge and called on the service’s managers to reverse their decision.
Mr Redford claims the ban has also hit his 82-year-old mother as she now refuses to hire a mobility chair, meaning they can no longer both shop in the town centre together in the chairs as they did before the ban.
The Netherton Road man said: “I’ve effectively been accused of acting like a boy racer. But how can you speed on something that takes about a week to go from 0 to 60.
“When I tell people I’ve a speeding ban on a mobility chair, they look at me in disbelief and then start laughing — it’s humiliating.”
He added: “I’ve had a clean driving licence for years and used to be a forklift driver so I know how these things work.
“I honestly didn’t know there was a speed limit on these chairs as I thought they only travelled at walking speed, yet the service’s manager told me that CCTV and two security guards saw me speeding on one — how can that be?”
Mr Redford says he needs a mobility chair after having had an operation on one of his knees.
He claims he now struggles to get about the town centre.
He continued: “I now have to use my stick and my mother has to use her zimmer-frame to get about and it’s annoying when we’re struggling to get through the town centre and all these people fly by us on chairs.
“If there is a problem with people travelling too fast in these chairs, why can’t lanes be put through the centre like cycle lanes on roads.”
East Kilbride Shopmobility said it could not confirm if any such ban was in place as the person who would have ordered it no longer worked at the project.
Manager Mike Swallow said: “I can’t say whether Mr Redford has been banned or not as we’re still trying to check it out.
“But if Mr Redford has a legitimate pass, I’m sure we can work something out.”