There could be enough computing ability in just one brain cell to allow humans and animals to feel, a study suggests. 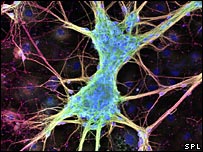 The brain has 100 billion neurons but scientists had thought they needed to join forces in larger networks to produce thoughts and sensations.
The Dutch and German study, published in Nature, found that stimulating just one rat neuron could deliver the sensation of touch.
One UK expert said this was the first time this had been measured in mammals.
The complexity of the human brain and how it stores countless thoughts, sensations and memories are still not fully understood.
Researchers believe connections between individual neurons, forming networks of at least a thousand, are the key to some of its processing power.
However, in some creatures with simpler nervous systems, such as flies, a single neuron can play a more significant role. The latest research suggests this may also be true in "higher" animals.
The team, from the Humboldt University in Germany and the Erasmus Medical Center in the Netherlands, stimulated single neurons in rats and found this was enough to trigger a behavioural response when their whiskers were touched.
A second research project from the US suggests the computational ability of the brain cell could be even more complex, with different synapses – the many junctions between neurons and other nerve cells – able to act independently from those found elsewhere on the same cell.
This could mean that, within a single neuron, different synapses could be storing or processing completely different bits of information.
Computing power
Dr Douglas Armstrong, the deputy director of the Edinburgh Centre for Bioinformatics, said the research did not mean all neurons had an individual role to play but that, in some instances, they might be capable of working alone with measurable results.
He said: "The generally accepted model was that networks or arrays make decisions and that the influence of a single neuron is smaller – but this work and other recent studies support a more important role for the individual neuron.
"These studies drive down the level at which relevant computation is happening in the brain."