Rising prices of consumer goods have become the top concern of urban
and rural residents, followed by "income gap" and "corruption,"
according to a survey by the Chinese Academy of Social Sciences (CASS). 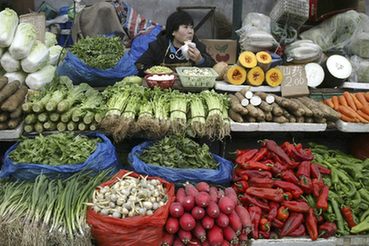 A
vendor waits for customers at a farmer’s market in Nanjing, Jiangsu
province, December 11, 2007. Rising prices of consumer goods have
become the top concern of urban and rural residents.

Results of the survey on urban and rural residents’
life satisfaction were published in CASS’s 2008 Blue Paper of Society
on Friday.

Director of the Institute of Sociology under CASS, Li Peilin, said that
30.5 percent of the people surveyed chose "rising prices of consumer
goods" as the most serious social problem, followed by "income gap" and
"corruption."

Both urban and rural residents feel the pressure from rising
prices of consumer goods in 2007, according to home visits conducted in
October of 2007 in seven cities, seven small towns and their
surrounding rural areas, and eight rural areas in Huangpo district of
Wuhan City, capital of central Hubei Province.

"Laid-off and re-employment" and "social security" used to be top
concerns in the 1999-2005 period. But "Rising prices of consumer
goods", to which 66.5 percent of urban residents and 57.5 percent of
rural residents surveyed expressed concern, jumped to the top of the
list this time. "Housing reform" with 24.6 percent and "food and drug
safety" with 26.6 percent ranked second on the lists of concerns of
urban and rural residents, respectively.

The country’s accumulated Consumer Price Index (CPI) increased by
4.6 percent in the first 11 months of 2007, to which food price hike
contributed more than 80 percent, reported China Finance Information on
Friday.