Researchers have conducted experiments in wind tunnels to yield data which might
help in the development of future military and civilian planes travelling at
hypersonic speeds. 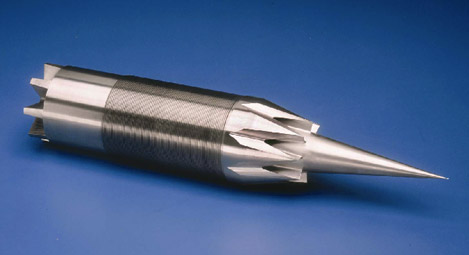 These
experiments have been conducted by a group of engineers and researchers at the
Purdue University in the United States for designing an advanced aircraft called
the X-51A that will be powered by scramjets (Supersonic Combustion
Ramjets).

The wedge-shaped
vehicle with a scoop-like cowl on its underbelly could be used for both military
and civilian purpose, and is expected to fly at Mach 6 — or six times the
speed of sound. It could also evolve into missiles that would be able to hit
mobile "time-critical"
targets.

The US Air Force
Research Laboratory and the Defense Advanced Research Projects Agency are
leading the project and has asked the Pratt and Whitney and the Boeing Company
to build the prototype of the
vehicle.

The engineers from the
Purdue University are working on the aerodynamics of the vehicle that would help
in maintaining the turbulent flow of air into the engine’s combustor to keep the
scramjet running properly, and in increasing the amount of smooth airflow over
the vehicle’s upper surface to reduce friction and heat that could damage or
destroy the vehicle.

Focussing
on the forebody, or the front portion of the vehicle, the researchers are using
a foot-long model for wind-tunnel
testing.

"The quiet wind tunnel
operation is critical for collecting data to show precisely how air flows over a
vehicle’s surface in flight. No other wind tunnel runs quietly while conducting
experiments in airstreams travelling at Mach 6," said Steven Schneider, an
aerospace engineer and professor in Purdue’s School of Aeronautics and
Astronautics.