Markus Frind, a 29-year-old Web entrepreneur, has not read the best seller “The 4-Hour Workweek” —
in fact, he had not heard of it when asked last week — but his face
could go on the book’s cover. He developed software for his online
dating site, Plenty of Fish, that operates almost completely on
autopilot, leaving Mr. Frind plenty of free time. On average, he puts
in about a 10-hour workweek. 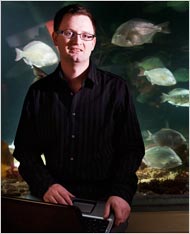 Markus Frind, at the Vancouver Aquarium, operates his dating Web site
out of his apartment. But for the most part, the site, Plenty of Fish,
runs itself.

For anyone inclined to daydream about a Web business that would all
but run itself, two other details may be of interest: Mr. Frind
operates the business out of his apartment in Vancouver, British
Columbia, and he says he has net profits of about $10 million a year.
Given his site’s profitable advertising mix and independently verified
traffic volume, the figure sounds about right.

There’s much to be
admired in Mr. Frind’s entrepreneurial success. But his site, now
almost five years old, has some unfinished patches and irritating
quirks and seems to come from the Anti-Perfectionist School of Design.

Mr.
Frind built the Plenty of Fish Web site in 2003 as nothing more than an
exercise to help teach himself a new programming language, ASP.NET. The
site first became popular among English-speaking Canadians. Popularity
among online daters in many United States cities followed more
recently, and with minimal spending on advertising the site. According
to data from comScore
Media Metrix for November 2007, Plenty of Fish had 1.4 million unique
visitors in the United States. In December, Mr. Frind said, the site
served up 1.2 billion page views, and page views have soared 20 percent
since Dec. 26.

Spending time at Plenty of Fish is a visually
painful experience. Wherever a row of members’ photos is displayed,
which is most pages, many of the faces are elongated or scrunched
because Mr. Frind has not taken the trouble to write the software code
that would automatically resize frames or crop photos to prevent
distortion. When I asked him why he had not addressed the problem, he
said it was a “trivial” issue that did not bother users.

A
blasé attitude is understandable, given that Plenty of Fish doubled the
number of registered customers this past year, to 600,000, Mr. Frind
said, despite the fact that each month it purges 30 percent of users
for being inactive. Somehow, the site instantly replenishes the lost
customers and attracts many more to boot.

No one heads to
Plenty of Fish for the customer service, which is all but nonexistent.
The company does not need a support structure to handle members’
subscription and billing issues because the service is entirely
advertising-based. Its tagline is: “100 percent free. Put away your
credit card.” For hand-holding, users must rely on fellow members,
whose advice is found in online forums. The Dating & Love Advice
category lists more than 320,000 posts, making up in sheer quantity
what it lacks in a soothing live presence available by phone.

The
principal customer service that Plenty of Fish provides is responses to
complaints about possibly fraudulent identities and to subpoenas and
search-warrant requests. Last year, Mr. Frind hired his first, and
still only, employee to handle these requests, freeing him to attend to
adding new servers when required and tweaking code. “Most of the time,
I don’t need to do anything,” he said.

To keep his site’s forums
free of spam, Mr. Frind has refined a formula for analyzing customer
feedback and arriving at a determination of whether a given forum post
is spam and should automatically be deleted. He has also devised some
new software twists that enable him to offload work to his customers,
letting users review the photos that are uploaded to the site.

Mr.
Frind says that close to 50,000 new photos come in every day, each one
of which needs to be checked to verify that it is an actual person and
that it does not not contain nudity. The work would be costly if Mr.
Frind relied on a paid staff to do it.

Fortunately for him, there
seems to be an inexhaustible supply of humans eager to look at pictures
of other humans, and Mr. Frind taps his customers to carry out the
reviewing, gratis. Some have made it their principal pastime. Among
Plenty of Fish’s volunteers were 120 who last year evaluated more than
100,000 images each. He explains his volunteers’ enthusiasm for the
work as an expression of gratitude: “Lots of people feel like they want
to give back to the site because it’s free.”

Plenty of Fish displays banner ads, Google-supplied
ads and, most profitable of all, “affiliate” marketing links that send
users to other dating sites. For example, Mr. Frind said, when one of
his customers clicks on an advertisement for a book titled “Double Your
Dating” and, after being sent to the publisher’s Web site, ends up
buying it for $40, the publisher pays Plenty of Fish a commission — of
$40 — for the sale, glad to have landed a customer that past experience
shows is a good prospect for “upselling” other goods and services
related to dating.

For all that Mr. Frind has
accomplished, his site looks puny when compared with Craigslist, which
has built a mighty automation engine tended by only a handful of
people. Craigslist’s personals draw about six million unique visitors a
month, more than any other dating site, and its listings for all
categories generate 10 billion page views a month. It covers 450
localities in 50 countries around the world — with only 25 employees.
It is among the top 10 busiest English-language sites, but the
customers who enjoy its free listings, like Plenty of Fish’s, must
serve themselves or seek assistance from others. “Anything that
represents customer hand-holding represents a failure of site design,”
said Jim Buckmaster, Craigslist’s chief executive. “We try to make
changes to the site to make the problem go away.”

BOTH Plenty of
Fish and Craigslist have created sites that run almost completely on
their own, but in different ways. Craigslist has no commercial messages
other than listings, and it collects fees only for a minuscule slice of
its posts. It charges employers for jobs listings in 10 of its 450
cities, and brokers for apartment listings in New York City. All other
listings are free. “To most of our users,” Mr. Buckmaster said, “it’s a
mystery how we make money.”

At Plenty of Fish, there is no
mystery: a large square of advertising sits in the middle of most
profile pages. Its success demonstrates that many consumers will
tolerate, and even embrace, advertising when a site offers a free
service for which others charge membership fees.

Mr. Frind has found that rare business in which the profits gush in, whether or not he leaves his hammock.