Nashville already has one of the busiest airports in the country for live music, but this month it will liven up even more with the opening of Tootsie’s, an offshoot of the Tootsie’s Orchid Lounge honky tonk where Willie Nelson and Kris Kristofferson once swapped songs and cold beers. 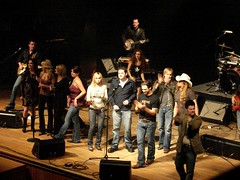 Members of the audience dash off suddenly during his show. Others talk on cell phones, read novels or wolf down sandwiches.

John Bontempi takes it all in stride. He strums his guitar and sings another tune near the clanking baggage carousel at Nashville International Airport.

"It took all of history just to make you mine," he warbles from under a dark cowboy hat.

Bontempi is among the 90 or so professional musicians who perform at
the airport in its push to add "local flavor," a break from the chain
gift shops and restaurants in airports from Miami to Seattle.

The musicians tend to agree, even if the audience is antsy and the
overhead announcements — "The local time is 2:30 p.m." — get annoying.

"It’s a lot of fun. You get a lot of different people coming
through," says Bontempi, a singer-songwriter who plays all original
material at his monthly two-hour airport shows. "I’ve had people on
their cell phones walk by and say ‘Hey, they even have music here —
listen’ and they hold up their cell phone."

Nashville
already has one of the busiest airports in the country for live music,
but this month it will liven up even more with the opening of
Tootsie’s, an offshoot of the Tootsie’s Orchid Lounge honky tonk where Willie Nelson and Kris Kristofferson once swapped songs and cold beers.

No one knows for certain, but Nashville International and Austin-Bergstrom International Airport in Texas
probably have more live music than any other airport in the country,
according to the trade group Airports Council International.

The cities share a rich musical heritage. Nashville’s reputation as the capital of country music goes back to the start of the Grand Ole Opry
in the 1920s. Austin’s thriving independent music scene grew from
country roots in the ’70s and is celebrated by thousands of music
industry representatives and fans who flock to the annual South By Southwest Festival.

"The airport is the gateway. It’s important that it reflect the
culture and character of the city," said Jim Halbrook, spokesman for
Austin’s airport, where a variety of musical acts do 11 shows a week.

Other airports have live music on a more limited basis. During the holidays, Boston Logan International
and Vancouver International had professional performers and local
school choirs. Lambert-St. Louis International has musicians playing a
few times a week. Fort Lauderdale Hollywood International in Florida has live entertainment during the fall and winter months.

In Nashville, the airport began offering music in the early ’90s as
country was hitting a growth spurt. Today, musicians of every stripe
play its five stages most days of the week.

On the same afternoon Bontempi sang his country songs in baggage
claim, a four-piece pop group called the Chessmen performed near the
security gate. A handful of people sat at the bar, a few worked at
laptops or watched ESPN. When the band broke into Jimmy Buffett’s beach anthem "Margaritaville," everyone clapped.

"It’s a nice touch," remarked Julie Wyte of Huntsville, Ala.
"My husband has been in the military for 20 years and we’ve been to
airports all over the world, and I don’t think I’ve ever seen that
before."

Airports across the nation are trying to mirror their cities. At Las
Vegas’ McCarran International Airport, travelers can play the slot
machines. At San Francisco International, they can tour an aquarium. At Palm Beach International in Florida, they can practice their putting.

The airports, in effect, are marketing tools. "The citizens who use
them feel at home, and the visitors coming in get a sense of the city
without leaving the airport," said Eileen Denne, spokeswoman for
Airports Council International.

Nashville’s niche has long been its music. From the vintage concert
posters on the walls to the guitars and banjos in glass cases, there’s
no mistaking the airport for another.

With the opening of Tootsie’s — actually, two of them, one in
the public area and one in the secure area — travelers can get a feel
for the gritty downtown dive where country singers past and present got
their starts.

But while the new airport clubs have the same live music and
decor as the original, don’t expect the same rough edges, like
beer-soaked floors and walls covered with graffiti and faded stars’
portraits.

Still, for singers and musicians like Bontempi, the airport
remains a sweet gig. For one thing, it pays ($32.50 per hour for the
side musicians, $65 per hour for the frontman), which is no gimme in a
town so crammed with people trying to get discovered that they’ll play
for free.

And while the audience is far from rapt, they can be appreciative.

As Bontempi performed, a stocky guy with a beard walked by once,
twice and a third time before finally setting down his bags and fixing
his attention on the tiny stage.

The man, a 28-year-old welder from Sacramento, Calif., named Keith Branson, smiled and nodded with the music.

"At least now I can say I heard a country singer in Nashville," he said.