The number of Internet users in
China grew so sharply in 2007 that the country now has the largest
Internet user population in the world, according to a January report by
the state-controlled China Internet Network Information Center as cited by Agence France-Presse.

At the end of 2007, China had
210 million Internet users. This represents a whopping 53% increase
over the previous year and translates to 73 million new users.

Increased uptake in rural areas accounted for part of the
growth where, so far, the Internet has been slow to come because of low
incomes and weak infrastructure. The CNNIC now says there were 52.6
million rural Internet users at the end of 2007, an increase of 127.7%
over 2006.

Interestingly, the report says China had 5 million fewer
Internet users than the US in 2007 and will have the largest online
population of any country beginning in 2008. However, eMarketer
estimates there were only 188.1 million US Internet users in 2007,
which already puts China well ahead of the world.

More important, however, 210 million users represent just a
fraction (16%) of the total Chinese population, meaning there are many
more Chinese Internet users to come. 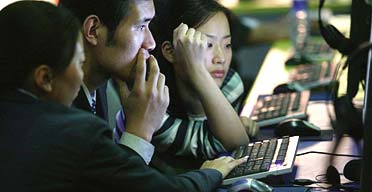