Over 100 theme park thrill-seekers agreed to bare everything on a bare knuckle ride in an attempt to scream their way into the Guinness Book Of Records on Sunday.  The 102 enthusiasts, who stripped off for the ride on the Green Scream rollercoaster at Southend-on-Sea in Essex, were hoping to beat a similar attempt in 2004 by 32 naked riders in Alton Towers, in Staffordshire. (Pics and video)

Organiser Tracy Jones said: ‘We wanted to raise as much money as possible for this brilliant charity and give everybody who was brave enough, the chance to be part of the world record. Consequently, we had to run the Naked Rollercoaster three times.’ Adventure Island boss Philip Miller said: ‘People have travelled from all over the UK to take part and we’ve heard some amazing stories from so many who have been directly, or indirectly, affected by cancer and wanted to give something back.’

Barbara Warner, of Bosom Pals, said it ‘takes of lot of nerve to take off all your clothes’ in front of so many people and the world’s media. 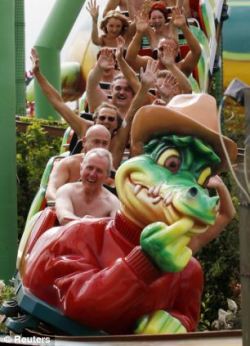 She added the appeal ‘would like to say a massive thank you to everyone who was brave enough to bare all and raise such a huge amount of cash – more than £22,000 – for our vitally important cause’.

Enough said about this. Now that you’ve seen the pictures and the video, shall we move on?