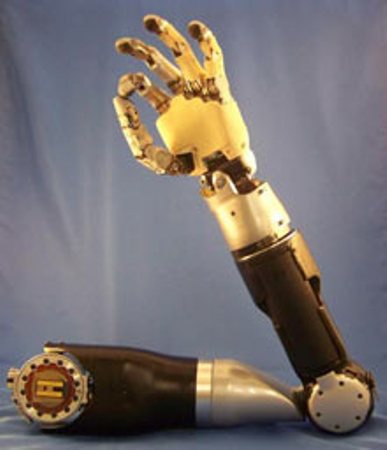 A brain-controlled prosthetic arm, under development at the Applied Physics Lab at Johns Hopkins University.

Most of the robotic arms now in use by some amputees are of limited practicality; they have only two to three degrees of freedom, allowing the user to make a single movement at a time. And they are controlled with conscious effort, meaning the user can do little else while moving the limb.

A new generation of much more sophisticated and lifelike prosthetic arms, sponsored by the Department of Defense’s Defense Advanced Research Projects Agency (DARPA), may be available within the next five to 10 years. Two different prototypes that move with the dexterity of a natural limb and can theoretically be controlled just as intuitively–with electrical signals recorded directly from the brain–are now beginning human tests.

Initial results of one of these studies–the first tests of a paralyzed human controlling a robotic arm with multiple degrees of freedom–will be presented at the Society for Neuroscience conference in November.

The new designs have about 20 degrees of independent motion, a significant leap over existing prostheses, and they can be operated via a variety of interfaces. One device, developed by DEKA Research and Development, can be consciously controlled using a system of levers in a shoe.

In a more invasive but also more intuitive approach, amputees undergo surgery to have the remaining nerves from their lost limbs moved to the muscles of the chest. Thinking about moving the arm contracts the chest muscles, which in turn moves the prosthesis. But this approach only works in those with enough remaining nerve capacity, and it provides a limited level of control. To take full advantage of the dexterity of these prostheses, and make them function like a real arm, scientists want to control them with brain signals.

“When you pick up an object, your brain knows automatically to rotate the wrist and move the fingers,” says Michael McLoughlin, who is overseeing the development of one of the prostheses at the Applied Physics Laboratory (APL) at Johns Hopkins University. “We want a dexterous limb and the ability to control it in a natural way, as well as some level of tactile feedback.”

Limited testing of neural implants in severely paralyzed patients has been underway for the last five years. About five people have been implanted with chips to date, and they have been able to control cursors on a computer screen, drive a wheelchair, and even open and close a gripper on a very simple robotic arm. More extensive testing in monkeys implanted with a cortical chip shows the animals can learn to control a relatively simple prosthetic arm in a useful way, using it to grab and eat a piece of marshmallow.

“The next big step is asking, how many dimensions can you control?” says John Donoghue, a neuroscientist at Brown University who develops brain-computer interfaces. “Reaching out for water and bringing it to the mouth takes about seven degrees of freedom. The whole arm has on order of 25 degrees of freedom.” Donoghue’s group, which has overseen previous tests of cortical implants in patients, now has two paralyzed volunteers testing the DEKA arm. Researchers at APL have developed a second prosthetic arm with an even greater repertoire of possible movements and have applied for permission to begin human tests. They aim to begin implanting spinal cord injury patients in 2011, in collaboration with scientists at the University of Pittsburgh and Caltech.

Volunteers in this study will get two different cortical chips, each carrying 100 recording electrodes. Scientists hope that doubling the capacity to listen to the brain will provide enough independent signals to enable more complex movements on the sophisticated APL arm. “This is a highly dexterous and anthropomorphic arm,” says Andrew Schwartz, one of the neuroscientists involved in the study. “The information bandwidth you need to control the device is a lot higher.”

The Pittsburgh researchers will also test new chips combined with telemetry systems, which process some of the recorded information on the chip before sending it to a processor implanted in the chest. The processor then wirelessly controls the arm. Current versions in use in humans and monkeys send information via wires coming out of the skull, which increases risk of infection over the long term. While the new setup will be somewhat similar to that used in cardiac pacemakers and deep brain stimulation devices, a prosthetic arm carries out more complex functions than a pacemaker, and therefore more information is needed to control it. “No implantable device has a telemetry system capable of this bandwidth,” says Schwartz. “This technology will be a big step.”

The Pittsburgh researchers ultimately aim to add sensory capability to the arms as well, adding materials that can sense heat and other properties and convey that information to a third chip implanted into part of the brain that processes sensory stimuli.

It’s not yet clear what the highest level of complexity will be in terms of controlling the arm. “We’re hoping to do at least 11 degrees of freedom,” says Schwartz. His team has developed algorithms that can derive seven degrees of freedom of movement in monkeys in real time. “How will we move up to 20 or 30? We don’t know, maybe we’ll need new algorithms, maybe more electrodes,” says Schwartz.

Even if the tests are successful, researchers face a big challenge; they must show that the invasive cortical control system is significantly better than noninvasive approaches. Amputees using the shoe-controlled interface can pick up boxes, operate a drill, and even use chopsticks. “If you were an amputee, and you can do that with shoes, would you have a sensor put in your brain?” asks Donoghue. It may be a matter of personal preference and the level of risk and benefit each person is willing to tolerate. “You might, because it’s more natural and you can walk and do other things.”