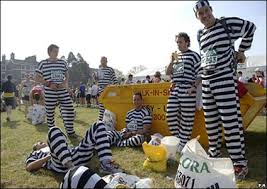 Serious offenders insensitive to upsides as well as potential losses

Men imprisoned for murder and other serious offenses have a well-earned reputation for taking dangerous risks. But their problems with risk assessment go deeper than that, a new study finds.

Relative to men who haven’t been incarcerated, prisoners generally have a harder time assessing the probability of big gains as well as harsh losses, says psychologist Thorsten Pachur of the University of Basel, Switzerland, who conducted the investigation with Yaniv Hanoch and Michaela Gummerum, both psychologists at the University of Plymouth in England. In experimental lotteries, prisoners display little appreciation of the benefits they stand a good chance of winning and frequently opt for smaller but sure rewards, Pachur and his colleagues conclude in the October Psychonomic Bulletin and Review.

If prisoners generally don’t appreciate or consider the consequences of risky options, “increasing punishment will not necessarily be successful in reducing crime,” Pachur says. Former prisoners may also find it difficult to see the potential upside of taking a chance on an entry-level job or educational opportunities, the scientists suggest.

Programs to enhance prisoners’ thinking skills should include sessions on how to understand the likelihood of various risky decisions to yield gains or losses, Pachur says. Current prison programs in England teach about moral reasoning, empathy and controlling impulses but have had little success in reducing crime.

“This article demonstrates that there is not one factor that makes some people risk takers and others risk avoiders,” remarks psychologist Timothy Pleskac of Michigan State University in East Lansing. Reduced sensitivity to likely pluses and minuses of risky decisions may partly explain criminal behavior, but researchers know little about risk assessment among prisoners, Pleskac cautions.

Men imprisoned for serious offenses may prefer to use intuitive, simplifying rules of thumb to assess risks of all types, leading them to ignore useful information about potential gains and losses, Pachur hypothesizes. It’s also possible that prisoners have often encountered situations with potentially big gains or losses — such as collecting millions of dollars in a successful bank robbery or spending decades in prison for a sexual assault — and thus become insensitive to the consequences of such decisions.

Pachur’s team administered lottery tasks to 51 men, ages 21 to 72, in a British medium-security prison and 50 British men in the same age range who had no prison records. Prisoners, who received a small amount of money for their participation, had been sentenced to an average of 23.5 years behind bars.

A mathematical model of decision making known as cumulative prospect theory was used to calculate the extent to which prisoners and nonprisoners reacted to changes in the value of possible lottery gains and losses as well as to differences in the probability of winning or losing from one lottery to the next.