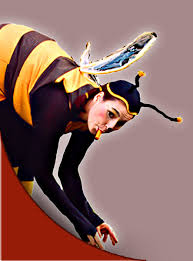 “It’s crazy how realistic they look when there under a microscope!”

The nature-nurture debate is a “giant step” closer to being resolved after scientists studying bees documented how environmental inputs can modify our genetic hardware. The researchers uncovered extensive molecular differences in the brains of worker bees and queen bees which develop along very different paths when put on different diets.

The research was led by Professor Ryszard Maleszka of The Australian National University’s College of Medicine, Biology and Environment, working with colleagues from the German Cancer Institute in Heidelberg, Germany and is published in the online, open access journal PLoS Biology.

Their work reveals for the first time the intricacies of the environmentally-influenced chemical ‘marking of DNA’ called DNA methylation, which has the capacity to alter gene expression without affecting the genetic code — a process referred to as ‘epigenetic’, or above the genome.

“In the bees, more than 550 genes are differentially marked between the brain of the queen and the brain of the worker, which contributes to their profound divergence in behavior. This study provides the first documentation of extensive molecular differences that may allow honey bees to generate different reproductive and behavioural outcomes as a result of differential feeding with royal jelly.”

Professor Maleszka said that the work goes a long way to answering one of life’s biggest questions.

“This study represents a giant step towards answering one of the big questions in the nature-nurture debate, because it shows how the outside world is linked to DNA via diet, and how environmental inputs can transiently modify our genetic hardware,” he said.

“Similar studies are impossible to do on human brains, so the humble honey bees are the pioneers in this fascinating area.”