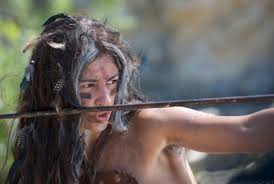 Also great with spears. These were days when you did NOT make your wife mad!

Fossil finger bones of early human ancestors suggest that Neanderthals were more promiscuous than human populations today, researchers at the universities of Liverpool and Oxford have found.

Scientists, in collaboration with researchers at the universities of Southampton and Calgary, used finger ratios from fossilised skeletal remains of early apes and extinct hominins, as indicators of the levels of exposure species had to prenatal androgens — a group of hormones that is important in the development of masculine characteristics such as aggression and promiscuity.

It is thought that androgens, such as testosterone, affect finger length during development in the womb. High levels of the hormones increase the length of the fourth finger in comparison to the second finger, resulting in a low index to ring finger ratio. Researchers analysed the fossil finger bone ratios of Neanderthals and early apes, as well as hominins, Ardipithecus ramidus and Australopithecus afarensis, to further understanding of their social behaviour.

The team found that the fossil finger ratios of Neanderthals, and early members of the human species, were lower than most living humans, which suggests that they had been exposed to high levels of prenatal androgens. This indicates that early humans were likely to be more competitive and promiscuous than people today.

The results also suggest that early hominin, Australopithecus — dating from approximately three to four million years ago — was likely to be monogamous, whereas the earlier Ardipithecus appears to have been highly promiscuous and more similar to living great apes. The research suggests that more fossils are needed to fully understand the social behaviour of these two groups.

Emma Nelson, from the University of Liverpool’s School of Archaeology, Classics and Egyptology, explains: “It is believed that prenatal androgens affect the genes responsible for the development of fingers, toes and the reproductive system. We have recently shown that promiscuous primate species have low index to ring finger ratios, while monogamous species have high ratios. We used this information to estimate the social behaviour of extinct apes and hominins. Although the fossil record is limited for this period, and more fossils are needed to confirm our findings, this method could prove to be an exciting new way of understanding how our social behaviour has evolved.”

Dr Susanne Shultz, from the Institute of Cognitive and Evolutionary Anthropology at the University of Oxford said: “Social behaviours are notoriously difficult to identify in the fossil record. Developing novel approaches, such as finger ratios, can help inform the current debate surrounding the social systems of the earliest human ancestors.”

The research is supported by the British Academy Centenary Research Project, Lucy to Language and published in Proceedings of the Royal Society B.