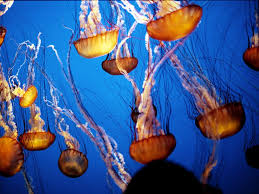 One man’s poison is another man’s cure!

Scientists in Yorkshire have developed a process that uses the luminous cells from jellyfish to diagnose cancers deep within the human body.

The method has been developed at the Yorkshire Cancer Research Laboratory at The University of York and the man who leads the York team, Professor Norman Maitland, believes it will revolutionize the way some cancers are diagnosed.

“Cancers deep within the body are difficult to spot at an early stage, and early diagnosis is critical for the successful treatment of any form of cancer,” he said. “What we have developed is a process which involves inserting proteins derived from luminous jellyfish cells into human cancer cells. Then, when we illuminate the tissue, a special camera detects these proteins as they light up, indicating where the tumors are.”

The process is an extension of the work done by American chemist Dr. Roger Y. Tsien, who won a Nobel Prize in 2008 for taking luminous cells from a common jellyfish called the crystal jelly and isolating the green fluorescent protein (GFP). The GFP is the substance that allows jellyfish to glow in the dark.

“When we heard about Dr. Tsien’s work, we realized how that advance might be useful in the diagnosis of cancer,” said Prof. Maitland. “X-Rays, for example, struggle to penetrate well deeply into tissues and bone, so diagnosing dangerous microscopic bone cancer is difficult. Our process should allow earlier diagnosis to take place.”

What the Yorkshire Cancer Research team has done is to use an altered form of the protein so that it shows up as red or blue, rather than its original green. Color is important for these tests, as most colors in the spectrum are rapidly absorbed, and tumors deep within the body become invisible. You can try this for yourself by shining a torch light through your hand — the only color which you can see is red.

In the procedure, viruses containing the proteins are targeted to home in on tiny bundles of cancer cells scattered throughout the body (metastases). Normally, this would not be enough to see the minute tumors, which are too small to be seen by conventional scanning techniques. But the viruses then start to grow, and while doing so make more of the red fluorescent proteins.

Thousands of copies are made in each cancer cell, a process, which is repeated in the surrounding cells, as the virus infection spreads and then stops.

“When a specially developed camera is switched on, the proteins just flare up and you can see where the cancer cells are.” said Prof. Maitland, “We call the process ‘Virimaging’ .”

If the research continues to go according to plan, the method is expected to be ready for clinical trials within five years and could be ready for diagnostic use by clinicians a few years after this. It has to be tested thoroughly, as a failure to detect such small cancers has serious consequences for patients.

However, while the system works in the laboratory, one major hurdle is a shortage of specialized cameras.

Only one company, based in the United States, has so far designed and built a camera system which allows the jellyfish proteins to be seen with the desired resolution deep in the body. The camera costs around half a million pounds, and Prof. Maitland is currently raising the funds to be able to buy one.