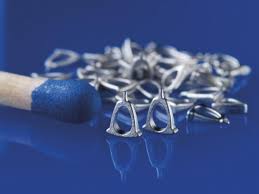 The process is based on the novel concept of bipolar electrochemistry: under the influence of an electric field, one end of a metallic object grows while the other end dissolves.

Thanks to this permanent self-regeneration, objects can move at speeds of the order of a hundred micrometers per second.

This work, published in the Journal of the American Chemical Society, could find applications in fields ranging from nanomedicine to micromechanics.

Several approaches are currently being explored to induce controlled directional motion of nano-or micro-objects. In particular, scientists are studying the use of so-called ‘fuel molecules’ which, by decomposing, can propel a dissymmetric object. Other potential avenues include reproducing natural systems by mimicking the motion of bacteria or the rotation of well-known biological systems such as ATP synthase.

For the first time, two researchers from the Bordeaux Institute of Molecular Sciences (CNRS/ENSCBP/Universités Bordeaux 1 and 4) have shown that such motion can be induced using a novel approach called bipolar electrochemistry. The chemists apply an electric field to metallic objects, which then have a different charge at each end, namely a positive charge at one end and a negative charge at the opposite end. This polarization is high enough for opposing redox chemical reactions to occur on both sides. Thus, the object is oxidized and dissolves at one end, while a metal salt present in the solution is reduced and metal is deposited at the other end, causing the object to expand. This process finally induces self-regeneration of the object while causing it to move. The motion brought about in this way is directed towards one of the two electrodes. Speed can be controlled by varying the potential difference between the electrodes.

The advantage of this method is that no conventional fuel is required to induce this motion. Moreover, such micromotors could be adapted so as to push other objects in a predetermined direction and disappear once their task is completed. This novel process opens up new prospects in various fields of application, ranging from micromechanics to nanomedicine.