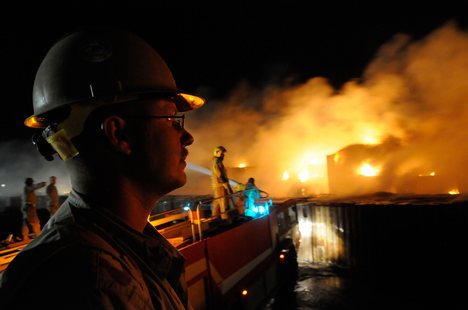 Wireless can makes the difference in emergencies!

For the first time, a wireless communication system is being tested in simulated emergencies. Dispatchers can locate responders with GPS and give them directions by text message. The system relies on wireless routers, which may be still available during a disaster even when cell phone towers are down.

PHILADELPHIA–In an emergency, seconds count. Wireless communication systems can help responders save lives. During 9/11, communication was challenging because the communications were destroyed in the attack. Researchers say a wireless system may be the answer.

A suspicious package is reported, and the Public Safety Command Center at Drexel University goes into action.

This is only a test, but this test could end up saving lives. For the first time, a wireless communication system is being used in a simulated emergency.

Using GPS technology, the dispatcher locates a patrol officer nearby and, instead of a radio, contacts the officer with a text message, giving directions based on the officer’s location. The officer responds with his own personal digital assistant.

“It gets beyond just the voice data and really shares information about the situation with the individuals on the ground,” says Bill Regli, of the Department of Computer Science at Drexel University.

The Dragon Force system incorporates information from cameras all over the university’s campus that show the Command Center what’s happening and where. It will be tested in the northeast this summer.

James Sim is President and COO of Drakontas, LLC in Glenside, Pennsylvania, the company that produces Dragon Force. “Now we have visual tools quite literally directing people exactly where they need to go, what they need to do,” he tells DBIS. “They can make faster, better decisions based on the information that they can actually see and share with one another.”

Because it’s wireless like a laptop using broadband Internet access with a wireless router, Dragon Force wouldn’t have been affected in the 9/11 attacks, when cell phone towers and police radios were destroyed.

“Dispatch Bike One and Foot Two.”

“The new technology definitely makes me feel more comfortable in the situations if there’d be an attack or a robbery,” says Drexel University student Samantha Sheehan.

And at Drexel, future perfection of wireless emergency response is a real probability.

BACKGROUND: Drexel University has developed and deployed next-generation wireless security technology for first responders. The Department of Public Safety in Atlantic County, New Jersey, will apply a $300,000 federal grant to test the technology on campus this summer, contrasting the emergency response rates of teams using the new system with those using traditional communications technology.

ABOUT THE SYSTEM: Called DragonForce, the new system is a suite of applications designed to enhance communications and enable spontaneous networking for campus public safety personnel. The ultimate goal is to have the DragonForce system replace GPS phones, two-way radios, handheld data recorders and incident report pads with a single, handheld PDA device. Among other benefits, it allows GPS to track officers’ locations in real-time. Map directions can also be sent using the handheld devices. Each team member receives directions based on their location. This should greatly shorten response times in emergency situations. Later versions of the technology will add such features as the ability to send text messages, the file incident reports from a crime scene, view photos of criminal suspects, and view security videos of incidents mere minutes after they take place.

HOW IT WORKS: Location tracking technology has many different components, including geographic information systems, the global positioning system (GPS), wireless local area networks and the infrastructure that has evolved around cellular phones and personal data assistants (PDAs). The Drexel system features PDAs with GPS capability, which capture signals from several separate satellites in orbit to pinpoint objects on earth. Security officers can use the devices to track the locations of their fellow officers on a campus map.