Waymo’s been operating in the Dallas area since 2020

Based in Mountain View, California, Waymo is a subsidiary of Google’s parent company, Alphabet Inc. Waymo Via has been testing and driving autonomous trucks in the Dallas area since 2020. It’s now rolling freight with driverless technology between Dallas and Houston (with a backup safety driver behind the wheel and a software technician in the passenger seat).

Cameras, radar, and lidar systems on the Waymo Via trucks enable them to navigate Texas highways autonomously.

“We run our trucks 24 hours a day, seven days a week,” Garff said. “I’m super focused on bringing this technology to market. We believe autonomous technology will bring safety to the roads and provide better efficiency. This facility that we’re at today, it’s nine acres. It’s built from the ground up to help us test for autonomous vehicles. It can accommodate hundreds of tractors and trailers and operators who will be here maintaining and operating the vehicles.”

The company is developing the Waymo Driver, an autonomous driving system that can control vehicles “in a safe and efficient manner.” Waymo Via is its trucking and delivery solution, and Waymo One is a ride-hailing solution currently operating in Arizona and scaling up in San Francisco.

Bringing ‘hundreds of jobs’ to the community

“This facility is going to bring hundreds of jobs in this community,” Peacock said.

Peacock praised the Texas legislature for having “the innovation and the forethought” to pass Senate Bill 2205 back in 2017. The state law implemented minimum safety standards for “autonomous vehicles” and “automated driving systems” in Texas, enabling companies like Waymo, Gatik, TuSimple, and Kodiak Robotics to launch pilot trucking operations in Texas.

Around 100 employees are already operating out of the hub now, Garff said. “As the operation moves from testing to actually autonomous movement, the type of jobs would be a little bit different,” he added. “But this facility is designed to handle hundreds of tractors and trailers. So it needs a lot of people—it’s very bustling.”

‘The home to autonomous vehicles in the U.S.’ 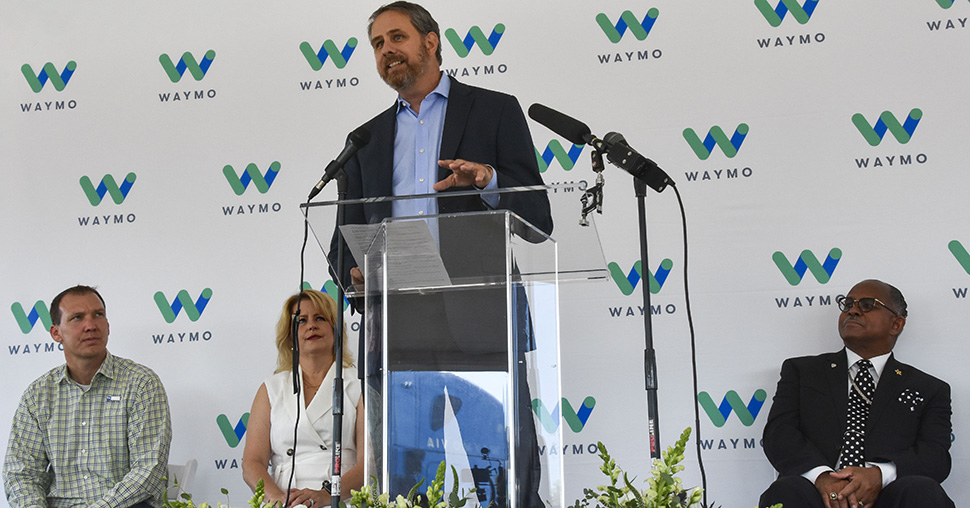 Duane Dankesreiter, SVP for research and innovation at the Dallas Regional Chamber, says Dallas-Fort Worth holds a strong position in autonomous vehicles in the U.S.—right at the top.

“This operation and Waymo’s investment in the region further cements Dallas-Fort Worth as the home to autonomous vehicles in the U.S.,” Dankesreiter said at the opening. “It’s no coincidence. We’ve heard a little bit about the policy that got set in place in 2017. That legislation set a great foundation and a great regulatory framework for companies to set up operations in Dallas like what we’ve seen today. The autonomous trucking industry needs predictable governance. We want to make it easy for companies to grow and expand.”

Dankesreiter noted that DFW leads the U.S. in job growth, and has “added more jobs than any other U.S. market” over the last three years.

“Trade and transportation is at the top of that stack,” he said. “That’s our growth. That’s the reason this is happening. And a lot of that is happening here in southern Dallas County and in the Inland Port.

“You’re seeing innovative companies like Waymo using the region as a proving ground and innovation corridor to test emerging technologies,” he added. “They’re hiring from our strong diverse talent pool and working closely with our universities and colleges to align curriculums for the workforce of the future. It’s so important to their growth, to our companies, and our region’s growth.”

Planning to expand ‘all through Texas’ 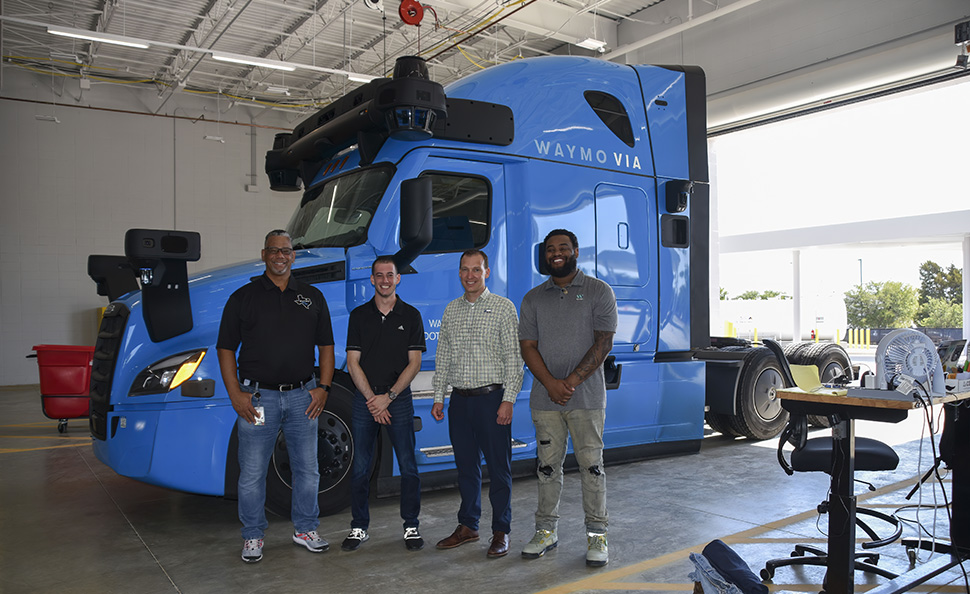 Brandon Cain, project manager and Dallas operations lead for Waymo, calls the built-from-the-ground-up Lancaster facility “one of a kind.”

The unique hub goes beyond a typical distribution center with a building that houses offices for management, hospitality amenities for employees, and tech bays to work on the vehicles.

Surrounded by space for hundreds of trucks and trailers, the facility has its own diesel fueling station and EV charging bays, he says.

Cain expects to continue to work with more partners and “expand all through Texas.”

In January, Waymo Via and J.B. Hunt Transport Services announced a long-term strategic alliance that will mean many more autonomous trucking pilot runs on I-45 between Fort Worth and Houston—with plans “to complete fully autonomous transport in Texas in the next few years.”

Just last week, Waymo and J.B. Hunt began a multi-week pilot to transport furniture and home goods for the online marketplace Wayfair along the I-45 corridor.

“The more we drive, the better we get,” Waymo’s Cain told Dallas Innovates.

Mayor: ‘Lancaster is right in the middle of that golden box’ 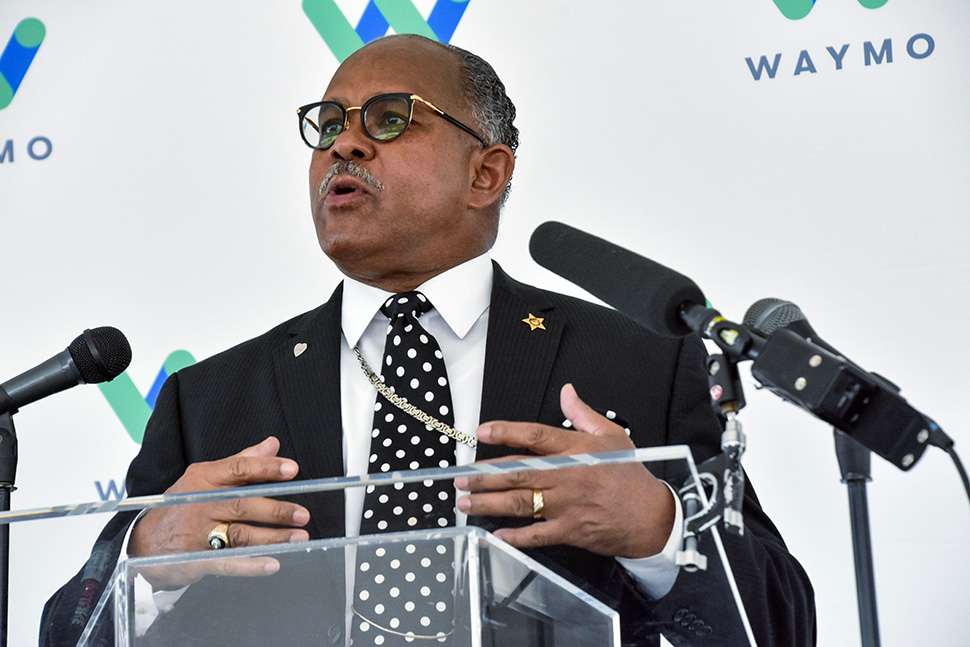 “Let’s talk logistics,” Lancaster Mayor Clyde C. Hairston said at the ribbon-cutting event. “To the west, 1-35, To the north, I-20. To the east, I-45, Lancaster is right in the middle of that golden box with golden opportunities.”

“I remember when nothing was out here,” Hairston added. “It was a vision.  Now you see the reality of that vision. I believe that [Lancaster’s partnership with Waymo] is going to get stronger and stronger.”

All those highways make Waymo’s new Lancaster hub central to its plans for Texas expansion, as well as offering a gateway to Phoenix, where Waymo recently expanded its driverless ride-hailing testing program, offering rides in Waymo Driver-equipped vehicles with no driver present. 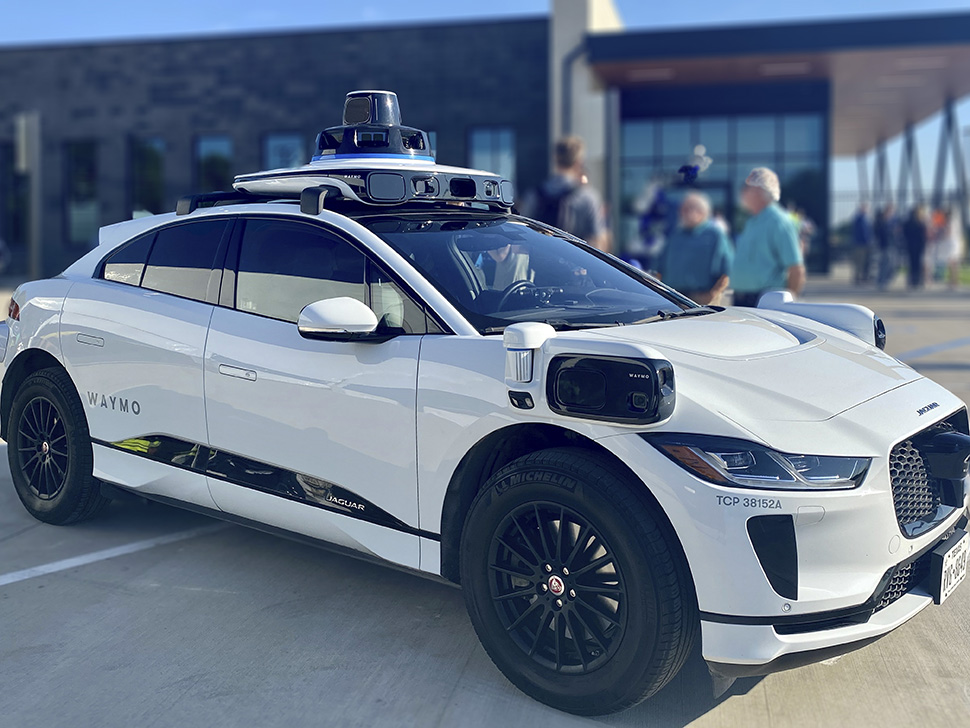 The company’s Jaguar I-Pace sedans were on prominent display at the opening. Asked if driverless ride-hailing might be a part of the plan for the DFW hub, Waymo’s Garff hinted that “it’s in the consideration.”

But, Cain adds, “Our main focus is to get these trucks off the ground first.”

Building the “world’s most experienced driver”

One of the biggest challenges of driverless technology, Garff says, is that the roads are all driven by individuals who learned how to drive in different places and people who might have different response times. “You have to build that into the system, which is very, very complicated.”

Garff says Waymo is “building the world’s most experienced driver” that can handle those kinds of challenges in an automated way—”every single time with no problems.”

When Waymo first started in trucking, “we did a single shift, five days a week in Arizona,” he said. Today, it’s 24/7 in Arizona and Texas and the company’s vehicles have driven well over 20 million miles—a number that is growing exponentially.

It’s “a lot of miles,” Cain said. But that helps the system “train, train, train” via data, artificial intelligence, and machine learning.

Cain, who has been with the company for six years and started at Waymo as an operator, says the person in the driver’s seat needs to be a commercial truck driver, or CDL. But the person in the right-hand seat is a software operator with a laptop. That “extra pair of eyes” is creating comments and dropping geotags as data is continually gathered in order to help the company’s engineers train the models, he says. 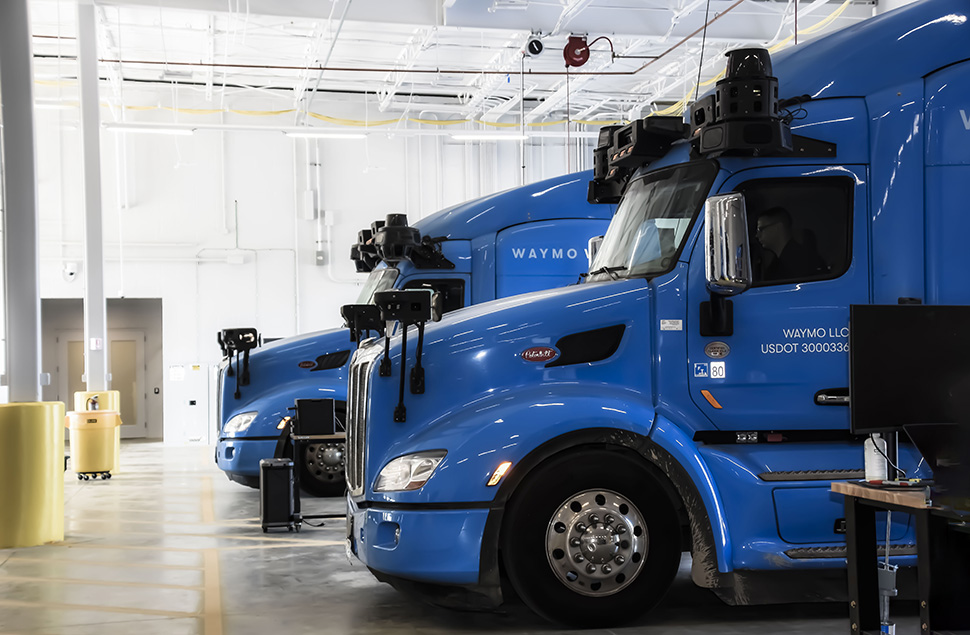 As the global head of policy, she appreciates how long the company must work to advance things before they can come to light— which includes building relationships in communities such as Lancaster.

“How do you forge the path forward with confidence and a rigid eye for safety? That’s the North Star that we’re focused on,” she said.

As Garff gave community leaders and reporters a tour of the new facility, he also stressed the importance of safety in autonomous trucking.

The trucks themselves, which are manufactured and built in Detroit, are made “roadworthy and ready” in Lancaster through what Waymo calls calibration, Garff said. 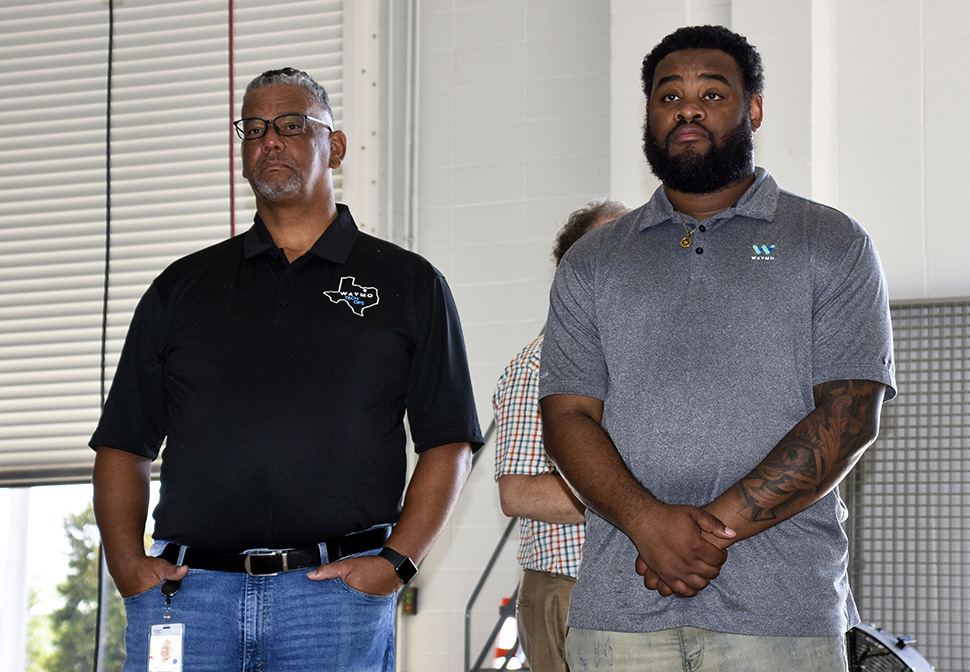 “We don’t ever want them to malfunction,” Garff said of Waymo Via’s autonomous Class 8 trucks. “There’s built-in redundancy in the platform and the system. And before we operate on any public road, we test everything in what we call the closed-course facility. We have closed-course facilities in Ohio and in California. The TRC—transportation resource center—is where we test everything, making sure all of the redundant systems are functioning and working. Safety is our top priority, always.”

And what if a police car’s siren wails right behind a Waymo truck?

Quincy Preston contributed to this report.