When Blockchain.com was looking for a new home for its U.S. headquarters, it decided to leave New York and move to downtown Miami.

“New York is a great city,” says Peter Smith, the cryptocurrency company’s co-founder and CEO. “But Miami was an easy choice for us.”

Miami’s vibrant nightlife and warmer weather were certainly a draw, but according to Smith, the decision ultimately came down to the city being better aligned with his company’s goals.

“It’s the gateway to Latin America,” he says. “It’s on the East Coast time zone. And more importantly, it’s probably the most excited city in the world about crypto right now.”

Cryptocurrencies are seen by many as the future of finance, and Miami is aggressively angling to become the world’s crypto capital – in a direct threat to New York’s status as the country’s financial hub, threatening New York’s dominance in finance.

Smith credits Mayor Francis Suarez with raising the city’s profile. During his first term, Suarez has gone all in on Bitcoin and blockchain, the technology that underpins it.Article continues after sponsor message

Today, Miami has its own cryptocurrency, called MiamiCoin, and last year, it hosted one of the world’s largest digital currency conferences.

“Crypto is incredibly important to the future of the city, and to how we are positioning ourselves right now,” Suarez told NPR in a recent interview. “We really have created the epicenter for crypto.”

Suarez has perfected the pitch he gives to investors and executives, like Smith. First, he mentions Miami’s beaches, cultural offerings, and professional sports teams. Then, he gets to the real sell.

“There is a cost of living differential, which is about two-to-one right now,” Suarez says. “It’s twice as expensive to live in New York as it is in Miami.”

According to the mayor, the city has reduced its real estate taxes “to the second lowest level since the 1960s,” and it has more room for new development than New York. Suarez also proudly points out that credit ratings agency S&P Global Ratings recently upgraded some of its stance on some of Miami’s bond ratings. 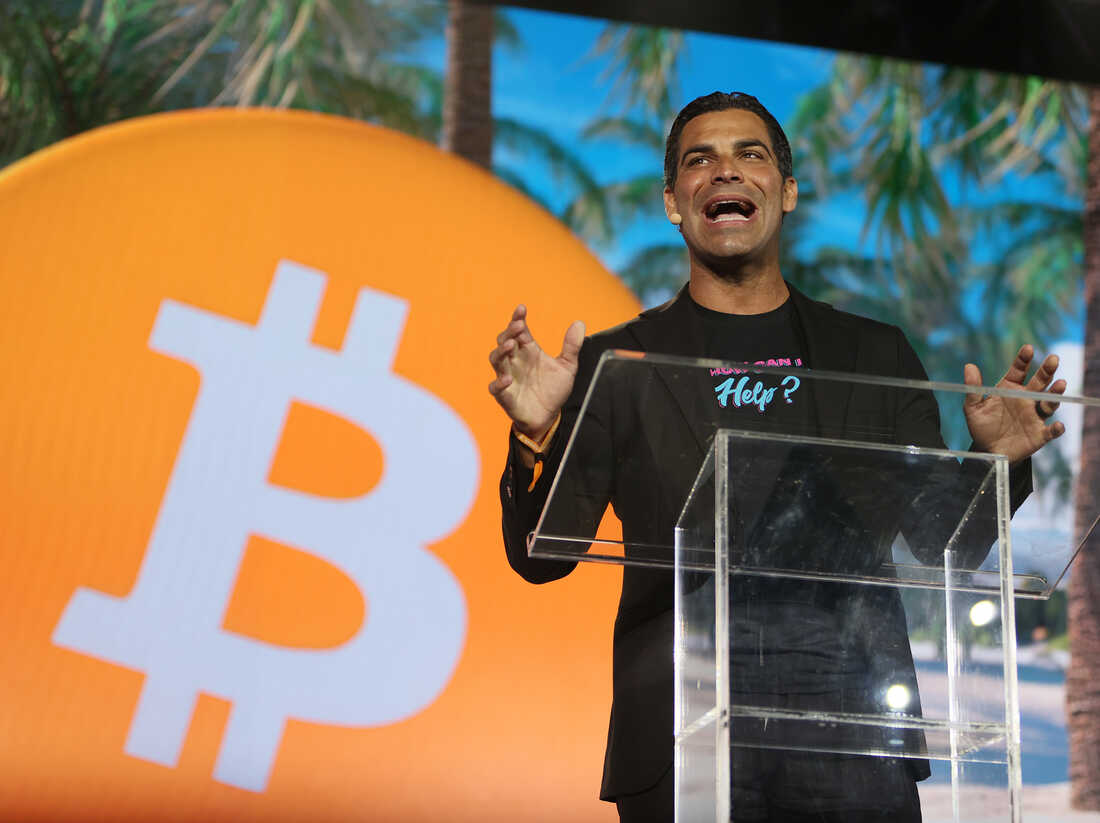 Miami Mayor Francis Suarez speaks at the Bitcoin 2021 Convention, a crypto-currency conference held at the Mana Wynwood convention center in Miami on June 4. Suarez is aggressively pitching Miami as a top destination for cryptocurrency companies.

His strategy seems to be paying off. Cryptocurrency companies FTX US, eToro and Bit Digital have announced plans to expand in Miami, and MoonPay and Orca Capital have set up shop there.

And Miami is even attracting more traditional financial firms. During the pandemic, Citadel Securities moved workers to South Florida, and the private equity firm Apollo Global Management is also opening a new office.

“We moved about $1.2 trillion worth of assets under management to Miami in the last 16 months,” Suarez says.

“NYC is going to be the center of the cryptocurrency industry and other fast-growing, innovative industries!” Eric Adams tweeted on Election Day. “Just wait!”

When Miami’s mayor promised to take his next paycheck in bitcoin, Adams doubled down. Or tripled down.

“In New York we always go big, so I’m going to take my first THREE paychecks in Bitcoin when I become mayor,” he proclaimed.

That caused a small stir and generated some headlines, but hours later, it became clear New York City can’t pay employees in anything but dollars. At least not right now. (Adams hopes to change the city’s payroll policy, but in the mean time, a spokesman for the mayor-elect says Adams will convert his pay into bitcoin himself.)

Tiffany Smith, a New York-based partner at the law firm WilmerHale, who represents crypto companies, says the city has its work cut out for it given that it must deal with state regulations seen as unfavorable by some in the industry.

“New York had regulation that was unfavorable, or seen as unfavorable, to the crypto industry,” Smith says. “And that caused a lot of companies to go outside New York.”

It was, Smith says, one of the first states to come out with a licensing regime.

State taxes are another obstacle, and one Adams can’t do much about. Unlike Florida, New York has a state income tax. 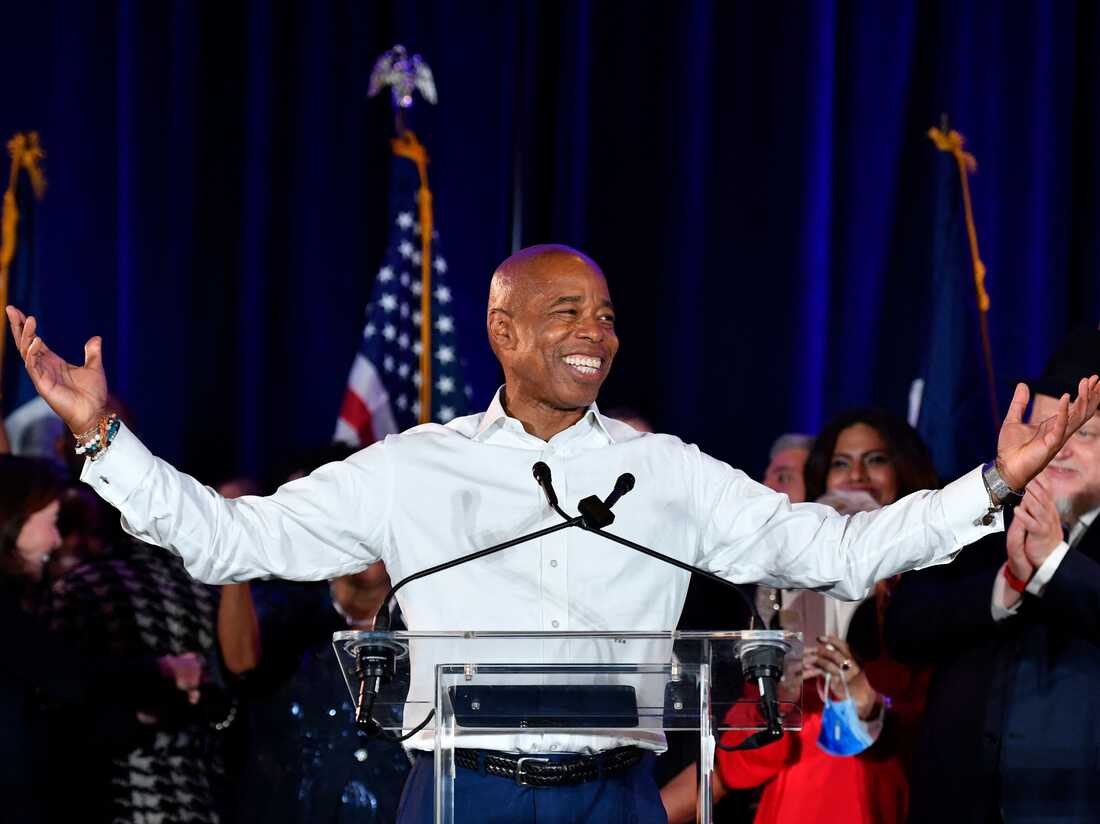 New York City Mayor-elect Eric Adams gestures to supporters during his election victory party at the Brooklyn Marriott on Nov. 2 in New York City. Adams is keen to promote New York as a crypto-friendly financial center.

But, New York City also has a lot going for it, Smith says. It is home to a thriving tech center and many world-renowned universities, including New York University, Columbia, and Cornell Tech. And she says crypto companies recognize there is an opportunity to recruit top talent from banks and other financial firms headquartered there.

According to Smith, New York has all the ingredients, but “it’s a matter of putting it together and marketing and really reaching out to entrepreneurs and investors.”

Crypto entrepreneur Patrick Stanley welcomes the competition between the two cities that want to become “crypto capitals.” He is part of a loose collective called CityCoins that created MiamiCoin.

Stanley argues the rivalry is a response to how attitudes have changed during the pandemic.

“People who are working in information-based fields are choosing cities the way they choose products,” he says, adding they are looking for leaders who are “technological progressives.”

So far, Adams, who declined NPR’s request for an interview, hasn’t put forward any concrete proposals. But he has floated adding crypto to the curriculum in New York City Public Schools, and he says that, if the city were to embrace crypto, it would lead to higher-paying jobs.

Adams will become New York’s 110th mayor on Jan. 1. In the meantime, Suarez has some advice for him.

“Hang on tight,” he says. “There’s a lot of things coming. And listen, there’s no shame in being number two.”