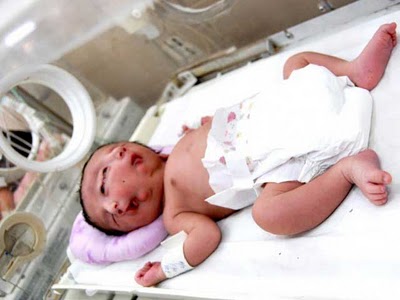 Two faces are not better than one.

Doctors at Holy Family Hospital in Rawalpindi have been trying to save a baby born with two faces, as he has been having breathing problems. They have been unable to feed the baby through the mouth, sources have said. The baby is the third child of a couple from Azad Jammu and Kashmir. Paediatric Ward Senior Registrar Dr Qaisar Aziz said that the new born baby has been shifted to the intensive care unit of the children’s ward and was being take good care of… The doctor, however, expressed low possibility for the survival of the child. The baby has two sets of eyes, noses, and lips, and one pair of ears. “As feeding through the mouth is not possible [at present], he is being fed through a naso-gastric tube. The two faces are angled to each other,” said Dr Qaisar. The doctors explained that medically such a condition comes under the category of Craniofacial malformation.

It is the first case of its kind in the history of the hospital, which was established before the creation of Pakistan. Cases of babies with joint heads or bodies have been treated by doctors, but a baby with two faces “is a novel phenomenon and needs special attention”, said the senior registrar. The baby’s parents, Shahida Perveen and Khalil Ahmed, have come from Palandir of AJK and the couple are reluctant to speak with media.

The last ultrasound test of the woman, taken just before the delivery of, had shown the baby boy as normal and healthy. Dr Qaisar further said there were “minimal chances” of the baby’s survival, who weighed 3.2 kg. Senior doctors said such birth abnormalities are often due to genetic reasons largely resulting from inter-cousin marriages.