If you’re feeling old, you’re in good company and apparently a lot of it. New statistics from the U.S. Census Bureau show that for the first time in U.S. history, older people are projected to outnumber children. And they expect it to happen in a little over a decade.

According to the U.S. Census Bureau’s 2017 National Population Projections, the year 2030 will mark an important demographic turning point in the country’s history.

In a report released this month, “Demographic Turning Points for the United States: Population Projections for 2020 to 2060,” U.S. Census Bureau demographers Jonathan Vespa, David M. Armstrong and Lauren Medina say the year 2030 will be a “demographic turning point for the United States.” Beginning in 2030, all baby boomers will be older than 65 which will expand the size of the older population to the extent that one in every five Americans is pro­jected to be retirement age. “Later that decade, by 2035, we project that older adults will outnumber chil­dren for the first time in U.S. history,” they report. Another demographic first for the U.S., 2030, because of population aging, is projected to witness immigration overtake natural increase (the excess of births over deaths) as the primary driver of population growth for the country. 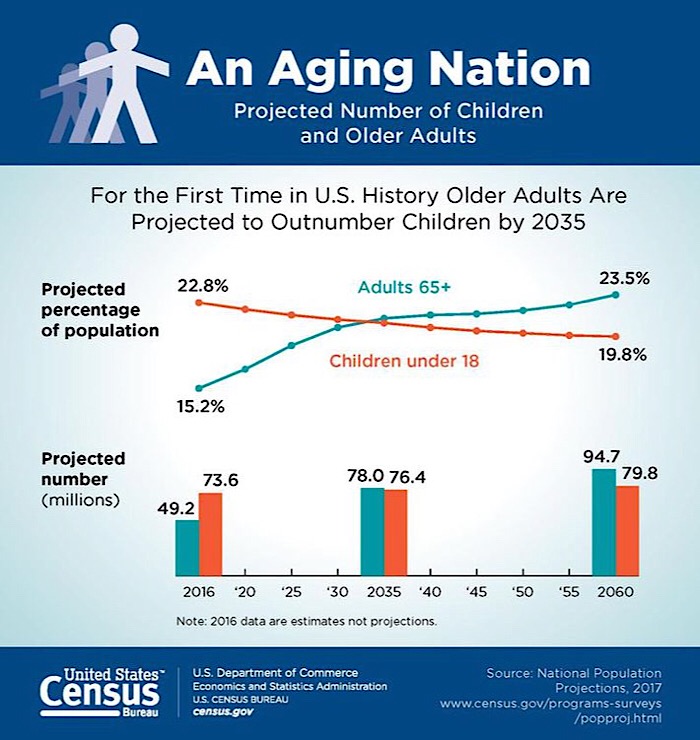 Indeed even the U.S. Census Bureau’s graphic (included below) screams of change. Titled “From Pyramid to Pillar: A Century of Change,” the graphic representation of the country’s population validates an immense shift in age-related demographics even to the novice data analyst.

The U.S. Census Bureau’s graphic titled “From Pyramid to Pillar: A Century of Change,” the graphic representation of the country’s population, validates an immense shift in age-related demographics even to the novice data analyst.(GRAPHIC COURTESY OF THE U.S. CENSUS BUREAU)

Vespa, Armstrong and Medina, in their report, say that beyond 2030, “the U.S. population is projected to grow slowly, to age considerably, and to become more racially and ethnically diverse.” Nevertheless, they say, despite slowing popula­tion growth, particularly after 2030, the U.S. population is still expected to grow by 78 million people by 2060, crossing the 400-million threshold in 2058.

The implications to our health care, economic and every other system we hold dear are tremendous. “The aging of baby boomers means that within just a couple decades, older people are projected to outnumber children for the first time in U.S. history,” said Jonathan Vespa, a demographer with the U.S. Census U.S. Census Bureau. “By 2035, there will be 78.0 million people 65 years and older compared to 76.4 million under the age of 18.” “Although births are projected to be nearly four times larger than the level of net international migration in coming decades, a rising number of deaths will increasingly offset how much births are able to contribute to population growth,” the U.S. Census Bureau reports. “Between 2020 and 2050, the number of deaths is projected to rise substantially as the population ages and a significant share of the population, the baby boomers, age into older adulthood. As a result, the population will naturally grow very slowly, leaving net international migration to overtake natural increase as the leading cause of population growth, even as projected levels of migration remain relatively constant.”

The 2017 National Population Projections are the third set of projections based on the 2010 Census and for the first time include projections of the racial and ethic composition of children and older adults. “This series updates the prior series released in 2014, which was the first to incorporate separate assumptions about the fertility of native-born and foreign-born women living in the United States, since the latter tend to have higher fertility rates,” the U.S. Census Bureau reports. “The 2017 series extends that work to include assumptions about the mortality of native-born and foreign-born people. For the first time, the national population projections will account for the generally lower mortality rates and higher life expectancy of the foreign-born, which allows us to better project for the effects of international migration on the population of the United States.”