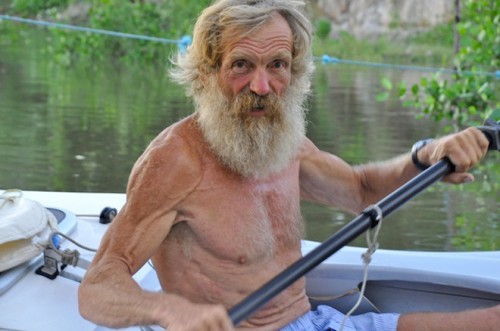 Kayaking to the beat of a different paddle.

Aleksander Doba, 64, crossed the Atlantic Ocean from Dakar, Senegal to Acaraú, Brazil in almost a hundred days. He’s the first person to do so nonstop:

After 98 days, 23 hours, 42 minutes at sea, Doba and his custom 23-foot-long, 39-inch-wide human-powered kayak landed at Acaraú, a city on Brazil’s northeast coast. The trip covered some 3,320 miles in all, and Doba became only the fourth known person to accomplish such a feat, and the very first to do it nonstop…

Of course, Doba encountered his fair share of obstacles along the way — age, a broken desalination unit, 20-foot swells and stifling equatorial heat — but none of that would deter him, as he survived on dehydrated food products, candy and fish (which he caught along the way). He also made time to collect rainwater for drinking, communicate by sat phone (recharged by solar panels lining his vessel), and even send out a few tweets.