The worlds biggest mouth doesn’t hold a candle to some of these crazy sex world records. 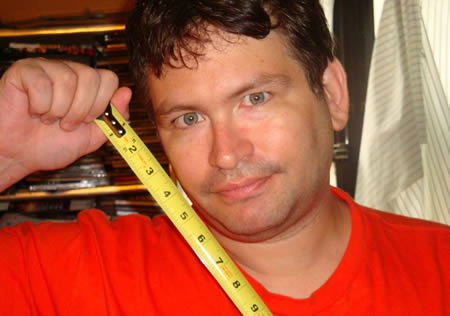 Is it time to measure yours?

The official rank of the largest penis belongs to a man measured and documented by Dr. Robert Dickinson in the earlier part of the twentieth century. This record-holding penis was 13.5 inches (34 cm) in length and 6.25 inches (16 cm) in circumference.

But the living owner of the world’s biggest human penis is Jonah Falcon. Falcon’s 13-5 inch member has been measured for a TV special, making him one of the few guys who can back up his bodily boasts. The Largest Vagina most likely belonged to Scottish giantess Anna Swan (1846-1888), a remarkable woman who set a number of records relating to her bulk. Born normally sized, she began growing at a prodigious rate in childhood, finally reaching a maximum height of 7′ 8″ at age 19. Capitalizing on her huge size, she joined a side show and toured the country, where she met and fell in love with Captain Martin Bates, another giant who measured over 7 feet tall. They wed in 1872, making them the tallest married couple in the world, a record that still stands today. The couple settled down into married life, built a mansion filled with enormous furniture, including an 11′ by 7′ bed where they consummated their union. On June 18, 1879, she gave birth to the largest baby in history, weighing 26 lbs. and 34 inches in length—so large, in fact, that it became tightly wedged in her capacious tract, only extricated by the use of forceps and belts. The child did not survive the rigors of birth, but a cast was made, still on display at the Cleveland Museum of Health. Generally the largest part of an infant is the head. We know that the tyke’s cranium measured about 19 inches (48cm) in circumference, hence we compute the minimum dilation of Swan’s passage as 6 inches, or just over 15 cm. That’s pretty wide—the normal dilation for childbirth is 10 cm. (Link) Feodor Vassilyev (1707-1782), was a peasant from Shuya, Russia. Though not noteworthy himself, his first wife, Valentina Vassilyeva, set the record for most children birthed by a single woman. She gave birth to total of 69 children; however, few other details are known of her life, such as her date of birth or death. She gave birth to 16 pairs of twins, 7 sets of triplets and 4 sets of quadruplets between 1725 and 1765, in a total of 27 births. 67 of the 69 children born survived infancy. The modern world record for giving birth is held by Leontina Albina from San Antonio, Chile. Now in her mid-sixties, she claims to be the mother of 64 children. Of these, 55 are documented. The mother with the greatest number of kids that are not tiwns is Livia Ionce. This Romanian woman, 44, gave birth to her 18th child in Canada in 2008. (Link)

World’s Biggest Distance for a Jet of Semen – 18 ft

Horst Schultz achieved 18 ft 9 in (6 m) with a ‘substantial’ amount of seminal fluid. He also holds the records for the greatest height (12 ft 4in) and the greatest speed of ejaculation, or muzzle velocity, with 42.7mph. (Link)

Prostitution is commonly known as the world’s oldest profession. Meanwhile police in Tai Pei estimate an 82 -year-old nicknamed “Grandma” to be the oldest living, working prostitute. Chiu went into the business about 40 years ago, after a man she had lived with for two decades died. She stays in the business charging ten or twenty times less than others prostitutes.(Link) A man by the name of Masanobu Sato attended the 2009 World Masturbate-a-thon held by the Center for Sex & Culture in San Francisco and set the world record for longest session by jerking it for 9 hours and 58 minutes. He came all the way from Japan just for the event, armed with a wide variety of sexual aids, and the record he was beating was his own. Last year he set the record with 9 hours and 33 minutes.
(Link) Meet Tatiata Kozhevnikova, the 42-year-old Russian woman with the world’s strongest vagina. No, seriously, she broke records to attain that title. Incredibly enough, she lifted 14 kilograms worth of weights– almost 31 pounds– to achieve such notoriety. She has been exercising her intimate muscles for fifteen years, and has already made her entrance into the Guinness Book of Records as the possessor of the world’s strongest vagina. “After I had a child, my intimate muscles got unbelievably weak. I read books on Dao and learned that ancient women used to deal with this problem using wooden balls,” she said.
(Link) The world’s oldest father has done it again, fathering a child for at least the 21st time, at the age of 90. Indian farmer Nanu Ram Jogi, who is married to his fourth wife, boasts he does not want to stop, and plans to continue producing children until he is 100. Mr Jogi admits he is not certain how many children his series of four wives have borne him – but counts at least 12 sons and nine daughters and 20 grandchildren. (Link)