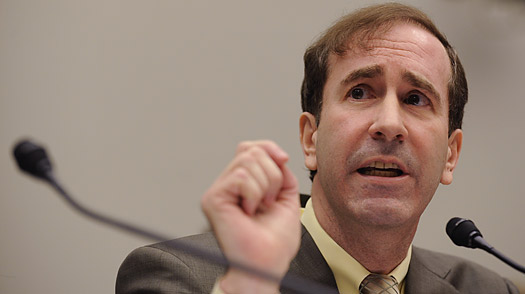 Harry Markopolos, the man whose e-mails detailing Bernie Madoff’s Ponzi scheme were ignored by the Securities and Exchange Commission has a new target — foreign exchange fraud.

Harry Markopolos, an independent financial fraud investigator and the subject of a film, Chasing Madoff, which opened Friday, told CNBC, “State Street and Bank of New York each stole billions of dollars from pension funds around the country, three-tenths of one percent off every transaction,” he said.

Pension funds are often major players in international investments and need foreign currency to complete those overseas transactions. Banks typically supply those currency services as part of a package of services for the pension funds’ business.

“If you’re a credit card holder and you go to Europe, and your bank charges you 3 percent for a foreign currency transaction, well, that costs them maybe three basis points” so they get a huge markup, he pointed out. He said the two banks hid the charges in what was contracted as a free service. Other banks, such as Capital One, have done away with forex fees.

With $4.7 trillion in foreign exchange trades every day, no government regulatory oversight and everything over the counter, forex is “a perfect recipe for fraud,” he said. There are legal actions already taking place against the banks in California and Virginia but “it’s a 50-state case. It will be many billions [of dollars] by the time it’s over.”

The banks have denied wrongdoing in those cases. Markopolos said he bases his assertions on the math: “The investment managers were saying they’re reporting this much and the pension funds were saying we’re receiving this much. The gap should’ve only been fees but there was something extra missing, 30 basis points for currency overcharges.”

Markopolos said the Madoff case was “a total wakeup call” for the SEC, which now has more financial examiners to go with all the lawyers. It “remains to be seen if [the SEC] becomes a credible law enforcement agency. If they’re not doing big cases 18 months from now, we have a big problem.”