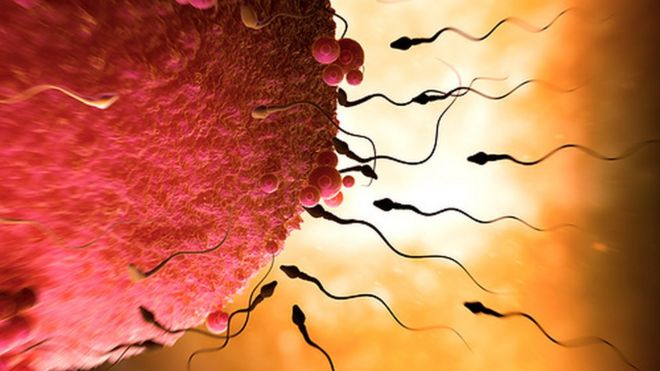 Scientists say early experiments suggest it may one day be possible to make babies without using eggs.

They have succeeded in creating healthy baby mice by tricking sperm into believing they were fertilising normal eggs.

The findings in Nature Communications, could, in the distant future, mean women can be removed from the baby-making process, say the researchers.

For now, the work helps to explain some of the details of fertilisation.

End of mum and dad?

The University of Bath scientists started with an unfertilised egg in their experiments.

They used chemicals to trick it into becoming a pseudo-embryo.

These “fake” embryos share much in common with ordinary cells, such as skin cells, in the way they divide and control their DNA.

The researchers reasoned that if injecting sperm into mouse pseudo-embryos could produce healthy babies, then it might one day be possible to achieve a similar result in humans using cells that are not from eggs. 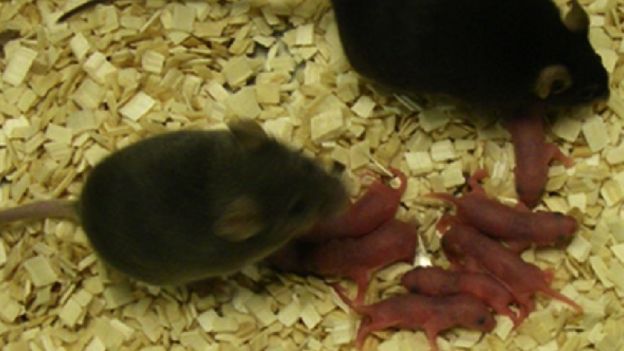 In the mouse experiments, the odds of achieving a successful pregnancy was one in four.

Dr Tony Perry, one of the researchers, told the BBC News website: “This is the first time that anyone has been able to show that anything other than an egg can combine with a sperm in this way to give rise to offspring.

“It overturns nearly 200 years of thinking.”

Those baby mice were healthy, had a normal life expectancy and had healthy pups of their own.

The goal of the researchers is to understand the exact mechanisms of fertilisation because what happens when a sperm fuses with an egg is still a bit of a mystery.

For example, the egg completely strips the sperm’s DNA of all its chemical clothing and re-dresses it.

That stops the sperm behaving like a sperm and makes it act like an embryo, but how the “costume change” takes place is not clear.

Removing the need for an egg could have a wider impact on society.

Dr Perry said: “One possibility, in the distant future, is that it might be possible that ordinary cells in the body can be combined with a sperm so that an embryo is formed.”

In other words, two men could have a child, with one donating an ordinary cell and the other, sperm.

Or one man could have his own child using his own cells and sperm – with that child being more like a non-identical twin than a clone.

Dr Perry stressed that such scenarios were still “speculative and fanciful” at this stage.

Earlier this year in China, scientists were able to make sperm from stem cells and then fertilise an egg to produce healthy mice.

Dr Perry suggested that combining the two fields of research may eventually do without the need for sperm and eggs altogether.

Prof Robin Lovell-Badge, from the Francis Crick Institute, commented: “I’m not surprised that the authors are excited about this.

“I think it is a very interesting paper, and a technical tour de force and I am sure it will tell us something important about reprogramming at these early steps of development that are relevant to both fertilisation and single cell nuclear transfer [cloning].

“And, perhaps more broadly, about reprogramming of cell fate in other situations.

“It doesn’t yet tell us how, but the paper gives a number of clear pointers.”