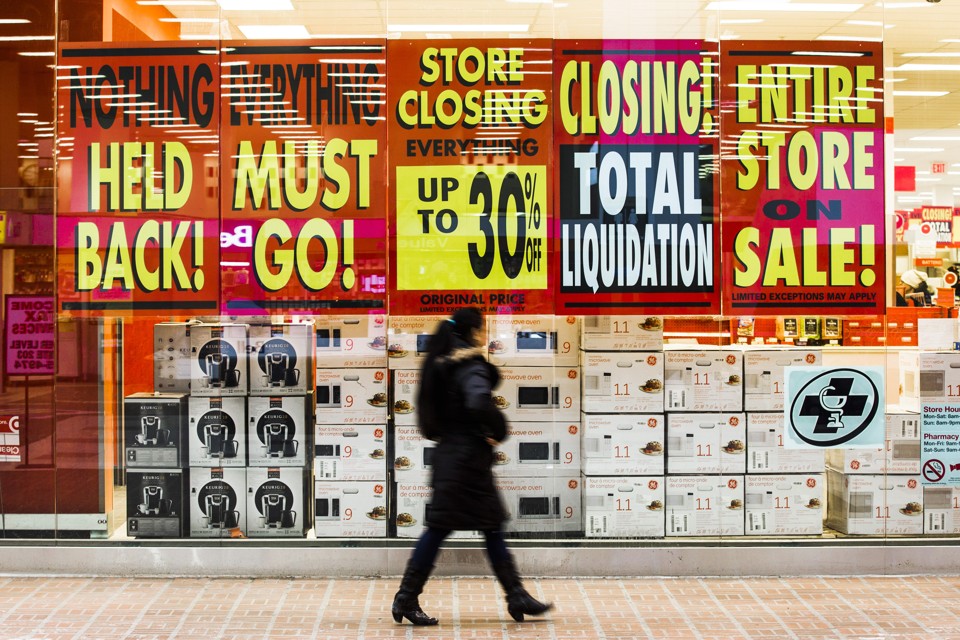 A deep recession might explain an extinction-level event for large retailers. But GDP has been growing for eight straight years, gas prices are low, unemployment is under 5 percent, and the last 18 months have been quietly excellent years for wage growth, particularly for middle- and lower-income Americans.

So, what the heck is going on? The reality is that overall retail spending continues to grow steadily, if a little meagerly. But several trends—including the rise of e-commerce, the over-supply of malls, and the surprising effects of a restaurant renaissance—have conspired to change the face of American shopping.

Here are three explanations for the recent demise of America’s storefronts.

1. People are simply buying more stuff online than they used to.

The simplest explanation for the demise of brick-and-mortar shops is that Amazon is eating retail. Between 2010 and last year, Amazon’s sales in North America quintupled from $16 billion to $80 billion. Sears’ revenue last year was about $22 billion, so you could say Amazon has grown by three Sears in six years. Even more remarkable, according to several reports, half of all U.S. households are now Amazon Prime subscribers.

But the full story is bigger than Amazon. Online shopping has done well for a long time in media and entertainment categories, like books and music. But easy return policies have made online shopping cheap, easy, and risk-free for consumers in apparel, which is now the largest e-commerce category. The success of start-ups like Casper, Bonobos, and Warby Parker (in beds, clothes, and glasses, respectively) has forced physical-store retailers to offer similar deals and convenience online.

What’s more, mobile shopping, once an agonizing experience of typing private credit-card digits in between pop-up ads, is getting easier thanks to apps and mobile wallets. Since 2010, mobile commerce has grown from 2 percent of digital spending to 20 percent.

The Growth of Mobile Shopping

People used to make several trips to a store before buying an expensive item like a couch. They would go once to browse options, again to narrow down their favorites, and again to finally pull the trigger on a blue velvet love seat. On each trip, they were likely to make lots of other small purchases as they wandered around. But today many consumers can do all their prep online, which means less ambling through shopping centers and less making incidental purchases at adjacent stores (“I’m tired, let’s go home … oh wait, there’s a DSW right there, I need new sneakers”).

There will always be a place for stores. People like surveying glitzy showrooms and running their fingers over soft fabrics. But the rise of e-commerce not only moves individual sales online, but also builds new shopping habits, so that consumers gradually see the living room couch as a good-enough replacement for their local mall.

2. America built way too many malls.

There are about 1,200 malls in America today. In a decade, there might be about 900. That’s not quite the “the death of malls.” But it is decline, and it is inevitable.

The number of malls in the U.S. grew more than twice as fast as the population between 1970 and 2015, according to Cowen and Company’s research analysts. By one measure of consumerist plentitude—shopping center “gross leasable area”—the U.S. has 40 percent more shopping space per capita than Canada, five times more the the U.K., and 10 times more than Germany. So it’s no surprise that the Great Recession provided such a devastating blow: Mall visits declined 50 percent between 2010 and 2013, according to the real-estate research firm Cushman and Wakefield, and they’ve kept falling every year since.

Shopping Space per Person, by Country 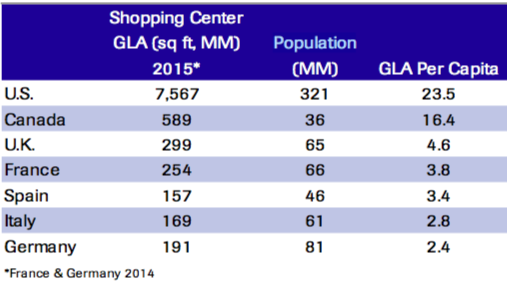 In a long and detailed paper this week on the demise of stores, Cowen and Company research analysts offered several reasons for the “structural decay” of malls following the Great Recession. First, they said that stagnating wages and rising health-care costs squeezed consumer spending on fun stuff, like clothes. Second, the recession permanently hurt logo-driven brands, like Hollister and Abercrombie, that thrived during the 1990s and 2000s, when coolness in high-school hallways was defined by the size of the logo emblazoned on a polo shirt. Third, as consumers became bargain-hunters, discounters, fast-fashion outlets, and club stores took market share from department stores, like Macy’s and Sears.

Finally, malls are retail bundles, and when bundles unravel, the collateral damage is massive. (For example, look at pay TV, where ESPN has bled millions of subscribers in the last few years as one of its key demographics, young men, abandon the cable bundle that is critical to ESPN’s distribution.) In retail, when anchor tenants like Macy’s fail, that means there are fewer Macy’s stragglers to amble over to American Eagle. Some stores have “co-tenancy” clauses in malls that give them the right to break the lease and leave if an anchor tenant closes its doors. The failure of one or more department stores can ultimately shutter an entire mall.

3. Americans are shifting their spending from materialism to meals out with friends.

Even if e-commerce and overbuilt shopping space conspired to force thousands of retail store closings, why is this meltdown happening while wages for low-income workers are rising faster than any time since the 1990s?

First, although rising wages are obviously great for workers and the overall economy, they can be difficult for low-margin companies that rely on cheap labor—like retail stores. Cashiers and retail salespeople are the two largest job categories in the country, with more than 8 million workers between them, and the median income for both occupations is less than $25,000 a year. But recently, new minimum-wage laws and a tight labor market have pushed up wages for the poorest workers, squeezing retailers who are already under pressure from Amazon.

Second, clothing stores have declined as consumers shifted their spending away from clothes toward traveling and dining out. Before the Great Recession, people bought a lot of stuff, like homes, furniture, cars, and clothes, as retail grew dramatically in the 1990s. But something big has changed. Spending on clothes is down—its share of total consumer spending has declined by 20 percent this century.

What’s up? Travel is booming. Hotel occupancy is booming. Domestic airlines have flown more passengers each year since 2010, and last year U.S. airlines set a record, with 823 million passengers. The rise of restaurants is even more dramatic. Since 2005, sales at “food services and drinking places” have grown twice as fast as all other retail spending. In 2016, for the first time ever, Americans spent more money in restaurants and bars than at grocery stores. 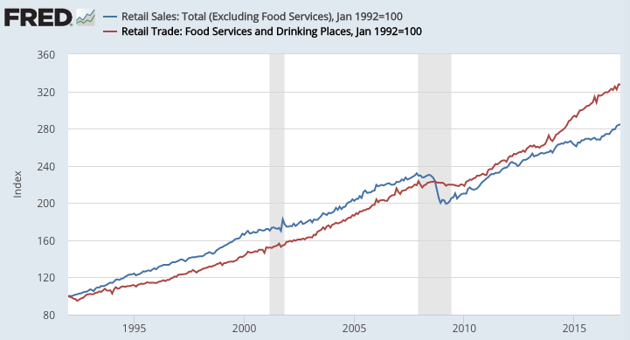 There is a social element to this, too. Many young people are driven by the experiences that will make the best social media content—whether it’s a conventional beach pic or a well-lit plate of glistening avocado toast. Laugh if you want, but these sorts of questions—“what experience will reliably deliver the most popular Instagram post?”—really drive the behavior of people ages 13 and up. This is a big deal for malls, says Barbara Byrne Denham, a senior economist at Reis, a real-estate analytics firm. Department stores have failed as anchors, but better food, entertainment, and even fitness options might bring teens and families back to struggling malls, where they might wander into brick-and-mortar stores that are currently at risk of closing.

There is no question that the most significant trend affecting brick-and-mortar stores is the relentless march of Amazon and other online retail companies. But the recent meltdown for retail brands is equally about the legacy of the Great Recession, which punished logo-driven brands, put a premium on experiences (particularly those that translate into social media moments), and unleashed a surprising golden age for restaurants.

Finally, a brief prediction. One of the mistakes people make when thinking about the future is to think that they are watching the final act of the play. Mobile shopping might be the most transformative force in retail—today. But self-driving cars could change retail as much as smartphones.

Once autonomous vehicles are cheap, safe, and plentiful, retail and logistics companies could buy up millions, seeing that cars can be stores and streets are the ultimate real estate. In fact, self-driving cars could make shopping space nearly obsolete in some areas. CVS could have hundreds of self-driving minivans stocked with merchandise roving the suburbs all day and night, ready to be summoned to somebody’s home by smartphone. A new luxury-watch brand in 2025 might not spring for an Upper East Side storefront, but maybe its autonomous showroom vehicle could circle the neighborhood, waiting to be summoned to the doorstep of a tony apartment building. Autonomous retail will create new conveniences and traffic headaches, require new regulations, and inspire new business strategies that could take even more businesses out of commercial real estate. The future of retail could be even weirder yet.