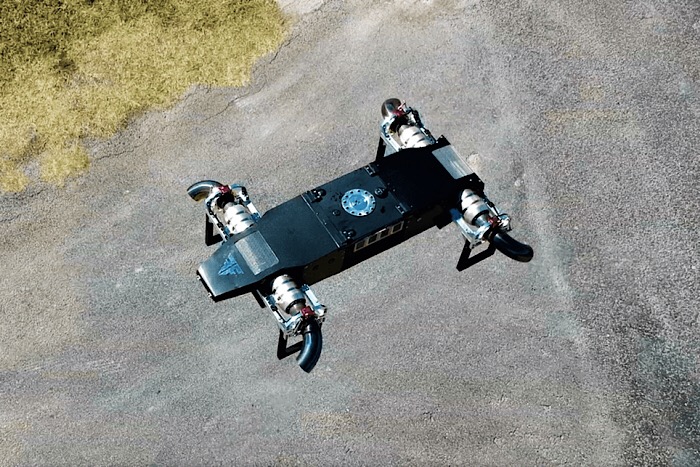 The production version of the aircraft will reportedly have a top speed of over 300 mph (483 km/h), with one fill of its 5-gallon (19-L) fuel tank being good for 30 minutes of hovering or 15 minutes of cruising. Down the road, the addition of components such as afterburners could boost its speed considerably.

It will carry a maximum payload of 40 lb (18 kg), with cargo being either attached to the drone itself or dangled on a line underneath – the company states that the cargo won’t be blasted by the engines in the latter configuration, as the thrust is never vectored straight below the AB5. The drone itself weighs a claimed 50 lb (23 kg), with a full tank of fuel adding another 40 lb.

FusionFlight CEO Alexander Taits tells us that the AB5 may be on the market by 2021, priced somewhere between US$200,000 and $250,000 depending on the model. Potential buyers are likely to be putting a premium on speed and power.

“The jet engines can put out significantly more power then electrically-driven propellers and also allow the vehicle to travel at much higher speeds,” says Taits. “Diesel fuel, on a pound-for-pound basis, stores 40 times more energy then any lithium-type battery and also will take minutes to refuel instead of the hours it takes to recharge an electrical drone.”

You can see the prototype taking off and hovering, in the following video.