50% of all employees will need reskilling by 2025, as adoption of technology increases, according to the World Economic Forum’s Future of Jobs Report.

That’s according to the third edition of the World Economic Forum’s Future of Jobs Report, which maps the jobs and skills of the future, tracking the pace of change and direction of travel.

But the very technological disruption that is transforming jobs can also provide the key to creating them – and help us learn new skills.

“We have the tools at our disposal. The bounty of technological innovation which defines our current era can be leveraged to unleash human potential,” says the Forum’s Founder and Executive Chairman, Professor Klaus Schwab.

“We have the means to reskill and upskill individuals in unprecedented numbers, to deploy precision safety nets which protect displaced workers from destitution, and to create bespoke maps which orient displaced workers towards the jobs of tomorrow where they will be able to thrive.”

Half of all employees will have to reskill in the next five years. 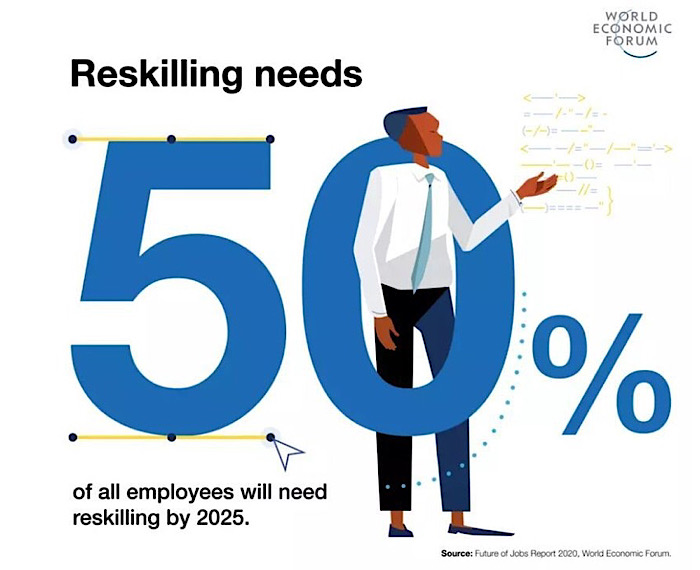 The Forum estimates that by 2025, 85 million jobs may be displaced by a shift in the division of labour between humans and machines.

But even more jobs – 97 million – may emerge that are more adapted to the new division of labour between humans, machines and algorithms.

Greater adoption of technology will mean in-demand skills across jobs change over the next five years, and skills gaps will continue to be high.

For those workers who stay in their roles, the share of core skills that will change by 2025 is 40%, and 50% of all employees will need reskilling (up 4%).

Critical thinking and problem-solving top the list of skills that employers believe will grow in prominence in the next five years. These have been consistent since the first report in 2016.

But newly emerging this year are skills in self-management such as active learning, resilience, stress tolerance and flexibility. This year, data from LinkedIn and online learning platform Coursera has allowed the Forum to track with unprecedented granularity the types of specialized skills are needed for the jobs of tomorrow, which are in demand across multiple emerging professions.

Among these ‘cross-cutting’ skills are specialized skills in product marketing, digital marketing and human computer interaction.

How long will reskilling take?

The vast majority of business leaders (94%) now expect employees to pick up new skills on the job – a sharp rise from 65% in 2018.

Respondents to the Future of Jobs Survey estimate that around 40% of workers will require reskilling of six months or less, but that number is higher for those in the consumer industry and in the health and healthcare industry.

In the financial services and energy sectors, that share of workers who can be reskilled within six months is lower because they will need more time-intensive programmes.

Training will be delivered internally, according to 39% of employers. But, as Professor Schwab noted, this will be supplemented by online learning platforms (16% of training) and external consultants (11% of training).

The pandemic has accelerated the trend of online reskilling. Between April and June this year, Coursera saw a fourfold increase in the numbers of people seeking out opportunities themselves.

Employers providing online learning opportunities for their workers increased fivefold and there was a ninefold enrolment increase for learners accessing online resources through government programmes. Some skills will take only a month or two to learn.

The platform says it could take just one to two months to acquire one of its top 10 mastery skills in emerging professions across people and culture, content writing, and sales and marketing.

It could take two to three months for learners to expand their skills in product development and data and AI. While a four-month learning programme could help people move into roles in cloud and engineering.

Such figures suggest that although learning a new skill set is increasingly accessible through digital technologies, individuals will also need the time and funding to be able to pursue new opportunities, the report notes.