For followers of tech blogs, sustainable design, and futuristic thinking, the term “NEOM” and “The Line” are by now familiar. Outside those circles, NEOM is not yet a household name. The term signifies a new, futuristic plan for a city, built to the highest standards of sustainability and convenience. It’s forward-thinking, controversial, and in the broad history of cities, is far beyond the scope of anything that has been done before.

NEOM, an acronym for “new future,” is garnering increased publicity due to its concept as the ultimate “smart city.” But if you’re like most of us, even if you’ve heard the term, you may not fully grasp what NEOM is all about. Let’s cover the basics of what NEOM is, where NEOM is, and when NEOM will be complete.

The overview explanation is this: NEOM is a futuristic city planned to be developed in Saudi Arabia’s Tabuk Province near the Red Sea. The Crown Prince of Saudi Arabia wants to build this new city in the desert, as a sort of futuristic utopia that encompasses the best aspects of modern city living — convenience, sustainability, and community — while leaving behind the bad (traffic, pollution, waste, and vulnerable water supplies).

This city will be in the shape of a long, thin line. Easily accessible within the city will be all amenities and care necessary for citizens. Also easily accessible will be the outdoors. The grand vision of NEOM is to create an urban oasis where humanity and nature live harmoniously, rather than an ever-expanding suburban metropolis that continually encroaches upon the natural world around it.

NEOM is also intended to be a “smart city,” meaning that technology and data will be used in real time to optimize everything about the city’s functionality and the lives of those who live there. This includes basic things like traffic monitoring and efficient urban design to more advanced functions like using live data to pinpoint potentially hazardous situations and rectifying them before something bad happens (think preventing a crash between two autonomous vehicles, or pre-patching a water pipe that is about to burst).

If there is one word to describe the line of thought behind NEOM it is efficiency. The city will be designed so that natural spaces will never be more than a five-minute walk away. Additionally, the city will be built within a four-hour flight of 40 percent of the globe. Peak technology and connectivity will be built into every aspect of the city, from residential and commercial spaces to play and workspaces. Despite its proposed location in the Saudi desert, it is 10 degrees cooler than much of the Gulf region. And, NEOM will be powered by 100 percent renewable energy.

“The Line,” as NEOM is often called, will encompass 10,200 square feet of the Saudi Arabian desert. Of course, building a new metropolis in the desert is far from sustainable — at least when compared to not building anything. The idea here is to bring forth a new concept of what a city can be—of how sustainable human living can be developed and furthered. The concept is designed to serve as a model for a sort of “new beginning” of urban development.

Is NEOM actually going to happen? 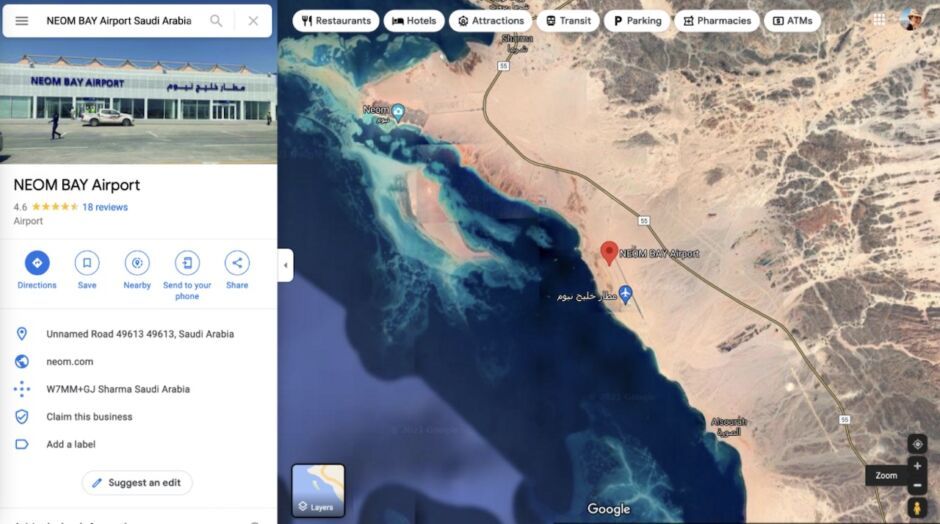 We’re not sure yet. It is planned, and ideas are in place. Many forward-thinking minds — including some that have ample political and financial influence — are at least interested in learning more, if not outright on board with the idea. These include Saudi Crown Prince Muhammed Bin Salman, who though a controversial figure, has been the curator and mind behind the project.

NEOM is to be funded by the Public Investment Fund of Saudi Arabia as well as private investors around the world who believe in its concept and ideas. The first phase of the project is expected to be completed by 2025.

A four-airport network is planned for the city, one of which is currently in service. This is the Neom Bay Airport, a domestic airport that does service commercial flights. Here you can see where NEOM and its current small airport are located:

The concept of NEOM and its line design is to build the world’s first city that has zero environmental impact. This, of course, is impossible, as any development anywhere has at least some environmental impact. NEOM does have the potential to showcase the most progressive technologies and concepts surrounding passive building design — buildings that generate the energy they use, and take nothing from “the grid.” It could also prove to be a model for preserving a city’s natural surroundings due to its line design.

NEOM’s design includes plans for food cultivation as part of its mission to be a self-sustaining city. Food will, according to the website’s outlineof how residents and visitors will be fed, be diverse and healthy. Everything will be grown organically and without pesticides, using high-tech greenhouses, aquaculture facilities, and a self-labeled “food park,” all of which add up to what the website claims is enough food production for a booming metropolis. With renewable energy, passive building design, and a minimal amount of waste production, NEOM hopes to be a model for how the cities of the future can be designed and built sustainably. Watching the city’s development is sure to be an interesting ride.