Shared micromobility companies have been adopting startlingly advanced new tech to correct for the thing that cities hate most — sidewalk riding. Some companies, like Bird, Neuron and Superpedestrian, have relied on hyperaccurate GPS systems to determine if a rider is riding inappropriately. Others, like Lime, have started integrating camera-based computer vision systems that rely on AI and machine learning to accurately detect where a rider is.

The latter camp has largely leaned on the innovations of Drover AI, a Los Angeles–based startup that has tested and sold its attachable IoT module to the likes of Spin, Voi, Helbiz, Beam and Fenix to help operators improve scooter safety and, most importantly, win city permits.

Drover, which was founded in May 2020, closed out a $5.4 million Series A Wednesday. The startup will use the funds to continue building on the next generation of PathPilot, Drover’s IoT module that contains a camera and a compute system that analyzes visual data and issues commands directly to the scooter. Depending on the city’s needs, the scooters will either make noises to alert a rider that they’re driving on the sidewalk or slow them down. The new version, called PathPilot Lite, will do much of the same, except it will be more integrated, better and cheaper, says Drover’s co-founder and chief business officer Alex Nesic.

Drover has modules on over 5,000 vehicles with orders for over 15,000 more that the company needs to deliver by the end of the year, according to Nesic.

Getting those next-gen modules into production will require hiring a few more minds across the engineering and project management side of things, as well as in government relations and communications over in Europe to aid Drover’s expansion across the pond.

Nesic said Drover also intends to hire a software engineer to help build out the data dashboards the company offers to micromobility partners. 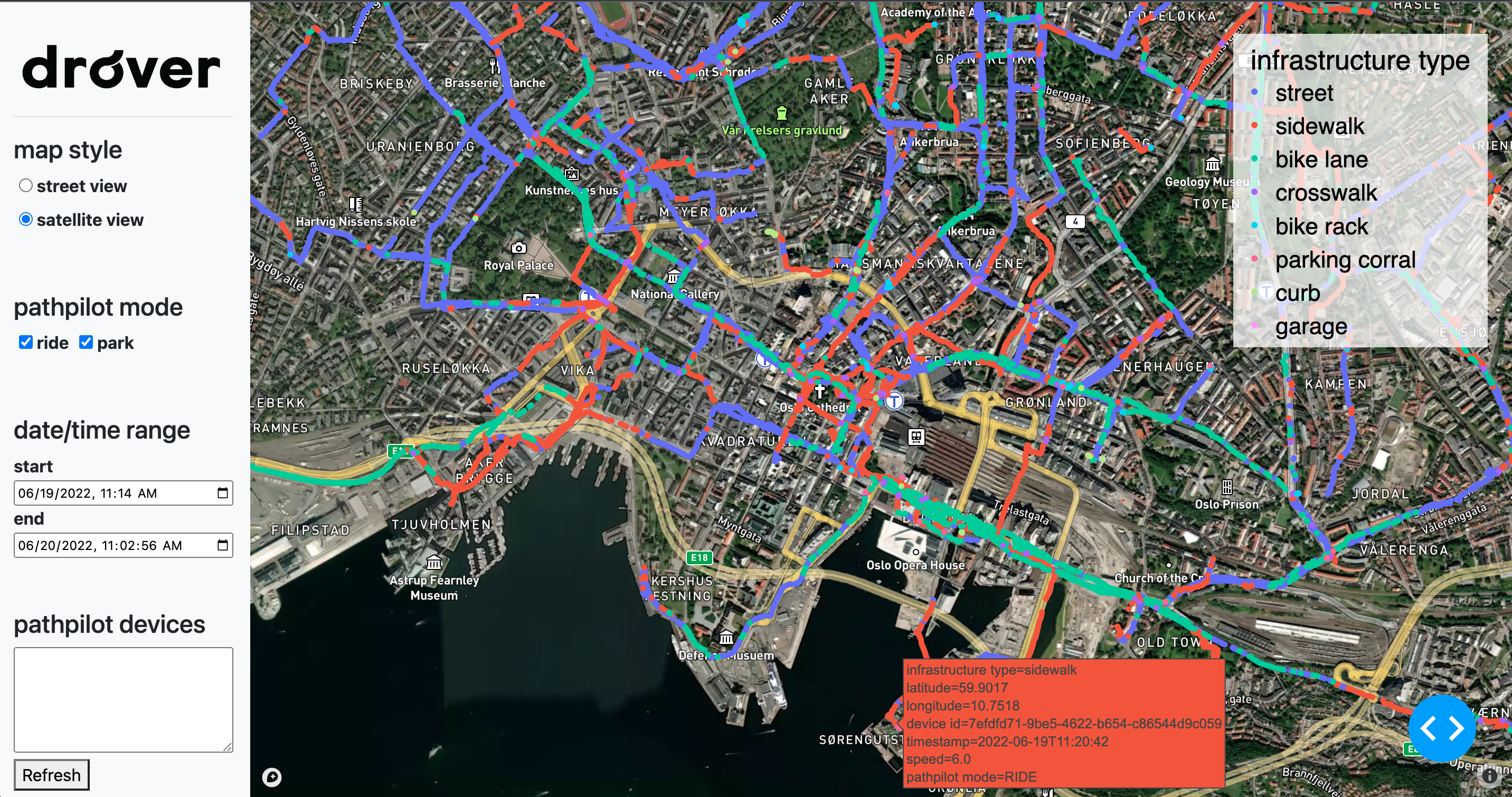 “We have a beta dashboard that shows a color-coded version of what trips look like broken down by infrastructure, how much time each vehicle spends on each section, and in aggregate across an entire fleet,” Nesic told TechCrunch. “We have a parking validation dashboard where for any one of your vehicles deployed in the city, you can see where the ride ended, what our AI scored the parking job as along with a photo. So all these tools we’re offering our operator customers that they could build themselves based on the data we’re already sharing with them, but they just don’t have the bandwidth, so these customer-facing tools are a value add.”

Drover also sells its data to cities and is exploring the use of distributed cameras moving through cities to build out a suite of tools that could potentially provide a city-facing dashboard that displays information like the state of infrastructure or bike lane violations, which is a “pet project” of Nesic’s.

“Our system can tell you, for example, the rider was on the bike lane for 20% of the time, 30% of the time on the sidewalk and the rest in the street,” said Nesic. “That can inform a lot of policy decisions on where to put bike lanes or whether the bike lanes you’ve invested in are working.”

Drover has been receiving interest from transportation agencies like Transport for London, as well as insurance companies that want this kind of granular data to understand how new mobility modes are being used in the infrastructure.

There are some who say the future of micromobility is really in owned vehicles, rather than shared. If that’s the case, it stands to reason that shared micromobility sets the trends that future private scooters will have to live by. Advanced rider assistance systems are becoming table stakes for operators moving forward who want to win cities, and Nesic thinks policy for private vehicles might soon follow — in fact, he’s hoping it doesml

“Part of the money we raised is gonna go towards exploring other integrations further up the supply chain with vehicle manufacturers and IoT manufacturers,” said Nesic. “The real goal is to drive the cost down, and if we can, already have our tech be a feature set of the next gen IoT that has compute capability already, and then we’re just licensing Drover’s AI, which is equipped to handle different infrastructure across the globe.”

But that’s way down the line. For the short-term, Drover is still hyperfocused on expanding off the backs of shared scooter companies that are increasingly hearing demand for this kind of tech from cities.

Drover’s Series A was led by Vektor Partners, a VC firm focusing on the future of mobility. The firm recently raised a €125 million fund for sustainable mobility,which is where Drover’s recent raise came from.