The civilization humans inhabit is filled with sounds that can’t be heard. Bats chitter and talk in ultrasonic; elephants growl infrared secrets to one another; and coastal ecosystems are aquatic clubs teeming with the cracks, hisses, as well as clicks of marine life. Mankind had no idea those noises existed for millennia. However, as technology advances, so does our ability to listen.

Drones, digital recorders, and artificial intelligence are already allowing humans to listen to the sounds of nature in new ways, altering the field of scientific inquiry and offering the intriguing potential that computers may eventually allow us to communicate with animals. Humans are one step closer to communicating with animals, thanks to new technologies that enable artificial intelligence-powered robots to converse with various species.

Karen Bakker, a University of British Columbia professor, recently disclosed that this innovation is being employed to speak with honeybees, dolphins, and elephants, and she issued a caution about the development.

Bakker expressed in an interview with Vox that this innovation raises a very major ethical question, because of ability to communicate with other living things may sound fascinating, but it has the potential either to generate a greater sense of connectedness or a sense of rulership and deceptive ability to control native wildlife that people never been capable of controlling as humans.

In Germany, she mentioned the application of artificial intelligence to converse with honeybees. Bakkerremarked that a German study team encoded honeybee messages onto a robot they sent inside a hive.

She elaborates that the robot can instruct honeybees to stop moving by using their waggle dance communication, and it can also tell honeybees where and how to fly to find a certain nectar source. The next step in this study will be to implant such robots into honeybee swarms so that the hives embrace these robots as part of their society from the start. Bakker highlighted at the time that humanity would have “unprecedented power” over the hives, thereby “domesticating” them. 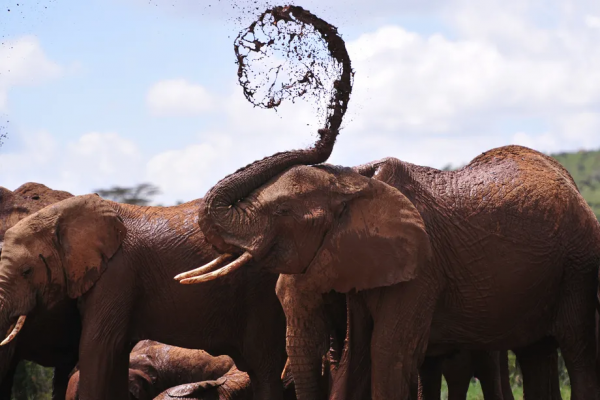 An African elephant throws mud at the Mpala Research Center and Wildlife Foundation near Rumuruti, Laikipia District, Kenya. Elephants have been shown to communicate using infrasound, which exists below the human range of hearing, and new technology is helping researchers decode what those sounds might mean.

As per Bakker, who explores modern technologies in her work The Sounds of Life: How Digital Technology Is Bringing Us Closer to the Worlds of Animals and Plants, these issues should not deter scientists from exploring animal communication. But the innovation’s goal is that with these principles in existence, in the future, people will have a much greater capacity to tune into nature’s sounds and understand what humans hear.

Bakker also believes it creates a true feeling of awe, wonder, and a profound sense of connectedness. And added that’s where she hoped humans would take such technology. She also stated in the Vox interview that the application of AI in connecting with animals is substantially different from how mankind has tried in the past.

For example, she referred to teaching apes human speech or sign language as a “very human-centeredattitude.” Now, science and technology are focusing on the habits and patterns of many animals. According to The US Sun report, Bakker noted that the procedure commences with recording noises made by animals and plants to find ways and connect those with movements to assess if there is complicated knowledge being given by the sounds.