Adertisers want to catch a person’s attention and create a memorable impression.   Billboard advertisements do just that.  They leave the reader thinking about the advertisement after they have driven past it.  They need to be readable in a very short time because they are usually read while being passed at high speeds.  Usually they have only a few words in large print and are humorous or have arresting images in brilliant color.  (Pics)

Besides targeting a specific audience according to location, billboard ads are also being on 24 hours a day. Compare the 24 hour per day exposure of a billboard versus a TV commercial or a newspaper ad. These advertisements have a useful life of 30 seconds at most. In addition to this great advantage is the fact that billboard advertising is very affordable. Although some of the most prominent billboards are alongside highways, there are many billboards on buildings in a city space where viewers can spend much more time reading the message. So it’s always important to take the context (where the ad appears) into consideration. What’s interesting is that companies may try hard to reach a specific location based audience, but in the end reach millions of people here on the Internet. Here are some incredibly creative billboards that actually managed to do that. 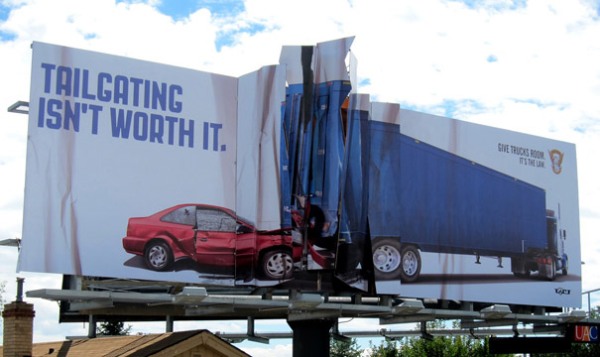 The Day After Tommorow