Keenon to have bases in 10 overseas markets this year.

SHANGHAI — As the pandemic propels restaurants and other businesses to keep their distance from customers, Shanghai-based Keenon Robotics looks to bring its automated helpers to markets across the globe.

At a Zui Hui Huang Chinese restaurant chain location here, Keenon’s robotic servers wait by the kitchen for meals to come out. Staffers load them up and tell them which tables to go to via touchscreen. Then they roll off, deftly avoiding obstacles in their way.

Built-in obstacle sensors are a major selling point of the robots. “They have an easier time carrying heavy things and can help ease labor shortages,” a representative of the restaurant chain said.

Keenon aims to have local units set up in at least 10 countries by the end of 2021. It opened a Japan arm in March with just under 10 staffers and is looking at South Korea and Singapore, as well as markets in Europe, North America and the Middle East.

Production capacity was roughly doubled in 2020 to prepare for overseas expansion. “Our factories all have extra space, and we can increase capacity to up to 200,000 units,” said Chi Xiaomin, who heads Keenon’s public relations — about triple current levels.

Low-end Keenon robots are around 1 million yen ($9,150) in Japan. “It’s a third of competing domestic models,” a distributor in Tokyo said. With the relatively low price tags as a tailwind, Keenon hopes that revenue will increase 50% to 300 million yuan ($46 million) this year.

Founded in 2010, Keenon says it is responsible for roughly 85% of food-serving robots ever sold in China. The country has been a pioneer in service robots, thanks partly to relatively relaxed regulation that benefits budding businesses, and it already uses robots commercially in such fields as food delivery and security. 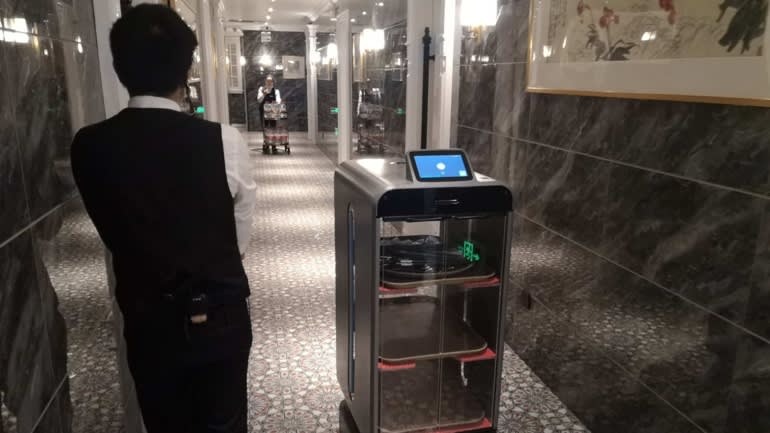 A robot helps a waiter at a restaurant in Shanghai. (Photo by Shin Watanabe)

Keenon has also gotten a big boost from the push to minimize the person-to-person spread of COVID-19. Its unit sales likely more than tripled to over 10,000 in 2020.

Sales of service robots were to increase 34% to $2.94 billion in China in 2020, roughly twice as fast as for the world as a whole, according to one industry forecast.

The company is a unicorn — an unlisted startup valued at $1 billion or more. An investment by SoftBank Group was announced in December, and Alibaba Group Holding has invested this year. Overseas expansion marks the next step in Keenon’s pursuit of growth.

But challenges remain. While Keenon is a relatively well-known company at home, it has little name recognition abroad. Clients appear more concerned about features than price at this point.

Many foreign markets also tend to focus heavily on the quality of customer service, meaning that robots and other automated solutions might not gain much traction among consumers seeking a more conventional experience.