CES is a technology event that showcases and demonstrates new and innovative technologies. It is a place where major companies conduct business and find new partners and where innovative individuals can present their ideas. The Consumer Technology Association organizes the event and covers all aspects of the technology industry.

Gluxkind, a baby gear startup based in Canada, was showcasing its Ella AI-Powered Smart Stroller at CES (a technology event in Las Vegas that showcases innovative new technologies). The smart stroller is equipped with technology similar to that found in autonomous cars and delivery robots, such as a dual-motor system for uphill walks and automatic downhill brake assist.

It also has sensors that detect objects around it, but the company emphasizes that it is intended to provide additional support to caregivers rather than replace them. The Ella stroller can navigate sidewalks and drive itself hands-free when no child is inside. It uses cameras to monitor its surroundings and make sure it avoids obstacles.

Gluxkind has provided a YouTube video demonstrating some of the stroller’s capabilities to reassure parents concerned about using a self-driving stroller. In the video, the stroller can automatically stop when a toy falls out and begins to roll away, and it can also continue moving on its own while a parent carries the child.

Self-driving technology is still developing and has not yet been fully proven or widely adopted. While some companies implementing self-driving technology in cars claim that it can increase safety when used correctly and the driver is attentive, it is not for everyone. Gluxkind, founded in 2020, has added some stroller-specific features to the Ella, such as an “Automatic Rock-My-Baby” function and a built-in white noise machine to help soothe sleeping toddlers. The stroller includes a car seat, infant bassinet, and toddler seat. 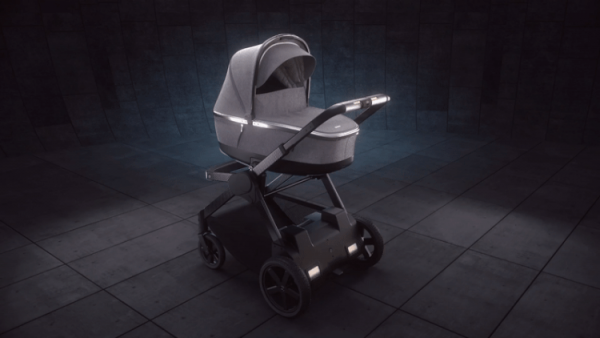 On the other hand, in March 2022, Honda and Sony announced collaborating to develop a battery-powered electric SUV. The project was eventually turned into its own company, Sony Honda Mobility. A year after the initial announcement, the company unveiled its prototype, called the Afeela, at CES 2023. The Afeela is based on the Vision-S 02 prototype originally shown at the event.

Anne Hunger, the CPO and co-founder of Gluxkind, stated in a press release that their own experiences inspired the development of the Ella stroller as new parents. The stroller, which weighed 30 pounds and was named an Innovation Awards Honoree at the 2023 CES show, can be pre-ordered for $3,300. Deliveries of the stroller are expected to begin in April 2023, according to the company’s website, as reported by CNN.

While CES organizers claim that attendance at the event is returning to pre-pandemic levels, the ongoing COVID-19 pandemic has still impacted. In 2021, CES was held entirely online, and last year it was a mix of in-person and online events, with a smaller number of attendees in Las Vegas. This year, TV and appliance makers and startups working in artificial intelligence are participating in CES, with Meta allowing people to try out its latest virtual reality gear and Google showcasing its smart home products.