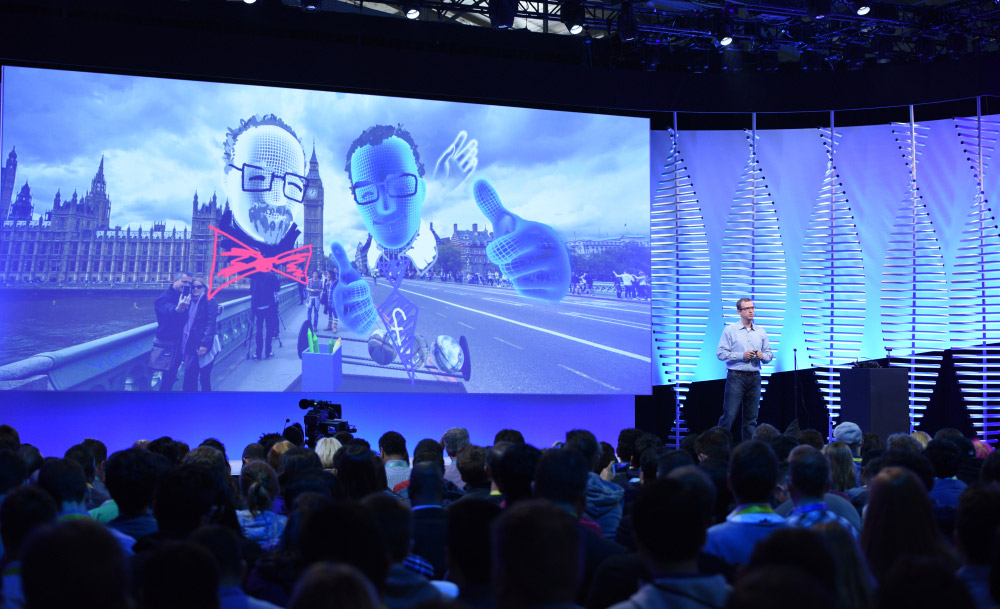 What does the the largest social networking company want with a device focused on single user experience? Many eyebrows were raised when Facebook bought Oculus VR in 2014. Today at F8, Facebook revealed how it thinks VR will be a rich social tool. During his keynote address, CTO Mike Schroepfer talked about what he calls “social VR.”

There’s no doubt, of course, that Facebook—and the other major players in the VR space: Google, HTC, Sony, Samsung, and many others—have every plan to leverage the single-user side of the virtual reality experience. But if VR is able to fulfill analysts’ predictions that the technology will become a $30 billion industry by 2020, it’s almost certainly going to take both single-user and social experiences to get there.

It’s too early to tell what will really become the so-called VR killer app, and how quickly VR will become a mainstream technology. A report issued today by Greenlight VR and Road to VR suggested that while early sales of VR hardware like the Oculus Rift, the HTC Vive, the Sony PlayStation VR, and Samsung Gear VR could hit around 2 million units by the end of this year, it will probably be between six and eight years before the technology is truly mainstream.

Facebook, though, is hardly deterred by predictions like that. In fact, a demo that Schroepfer showed on stage at F8 was just a very early prototype of what social VR could be, and while the company would surely love to hand ready-for-primetime social VR experiences to users today, it’s a safer bet to expect them when they’re ready, and really capable of delivering what the company calls “social presence”—the sense that you’re really with other people, sharing real experiences, when you’re using multiperson VR.

Oculus first began showing people multi-user VR last year, it’s “Toybox” experience, a delightful two-person romp that utilizes the company’s hand-held Touch controllers, which integrate users’ hands in three-dimensional space. If you ever listen to Facebook CEO Mark Zuckerberg talk about VR, you’ll inevitably hear him talk about how you can play ping-pong against another person in VR. That’s Toybox.

Now, though, Facebook is making multi-user VR much more social. During his keynote, Schroepfer showed how he and Mike Booth, a Facebook engineer located at the company’s Silicon Valley headquarters more than 30 miles away, were able to jump together into a series of 360-degree photographs, with each person represented by an animated avatar, and each able to see all around them as they interacted.

They even pulled out a VR selfie stick and took an instant selfie, which they then uploaded directly to Facebook. This was totally social—no game mechanics at all. That’s because, Social VR product manager Mike Beltzner explained to Fast Company at F8, Facebook found through its research that playing games, even with other people, took away from the social experience. “The more game-like it is,” Beltzner said, “the less you interact.”

That’s why the Social VR team, led by Daniel James and Booth, has been working on building VR that gives users a richer sense of inhabiting spaces together. Schroepfer’s demo, seen in the video above, was the result. Indeed, Beltzner recalled that many of his in-person conversations with Booth these days at some point inevitably turn to Booth talking about the fun things he’d done with other people recently in VR.

Within the virtual reality industry, some seem impressed with where Facebook is heading.

“Some have raised concerns that VR and [augmented reality] might be disconnecting, but Facebook’s social VR demo shows how these immersive experiences can bring people together,” said Linc Gasking, the cofounder and CEO of 8i, a leading VR technology developer. “It’s clear that the holy grail for VR and AR is people. It’s real humans that are going to drive these social interfaces that will connect us in ways we haven’t yet imagined. Soon you’ll not only be able to take a virtual selfie with your friend, but imagine taking a selfie with your friend and Steph Curry after watching a Warriors game in VR.”

All of that may be coming, but we’re not there. Yet. Facebook knows that. What was important is that it’s being realistic about where it’s going with the technology, rather than trying to convince the world it’s moving faster than it really is. As my colleague Harry McCracken put it, “For a demo of VR to people who aren’t wearing VR headsets, that was really effective. Also, unlike Microsoft’s HoloLens demos, it didn’t overly hype the experience.”

During his own time on stage at F8, Oculus Research’s Yaser Sheikh talked at length about the major challenges that anyone building true social experiences in VR has to overcome before users will be satisfied.

While the goal is creating “genuine, deeply convincing” interactions, Facebook is a long way from getting there, Sheikh said. Still, the company is working hard to solve that problem.

And what is realistic “social presence” in VR? Sheikh likened it to when someone is using virtual reality and finds that they cannot step off a ledge, despite being acutely aware it’s not real. With social presence, he said, you feel like you’re really with other people, even though you know you’re in a virtual environment. True social presence in VR will only come when you can pick up on the same kind of subtle social cues that people express—with expressions, gestures, and the like—that we make in real life.

To get there, Sheikh argued, it will be necessary to figure out technical approaches that capture the subtleties of our actions, display them in VR, and—even more complicated perhaps, given network latency issues—predict what we’re going to do next.

These kinds of unspoken cues are “an elaborate code that is written nowhere, known to no one, and understood by all,” Sheikh asserted, quoting anthropologist and linguist Edward Sapir. And without a computational understanding of that code, there can be no satisfying social VR, Sheikh argued.

That, no doubt, is why he and so many others work at Facebook and Oculus—organizations with gigantic financial resources and a commitment to developing algorithms that can crack that code. And it’s no doubt why Schroepfer and Sheikh spent their valuable keynote time today speaking to thousands of developers, some of whom may help to overcome these challenges.

While the on-stage demo involved Schroepfer and Booth interacting inside a still 360 image, Beltzner told Fast Company that the social VR group has worked with 360 video as well. To be sure, he said, there are problems with that, but when it works, “instead of being in a static world, you’re transported to a place with motion and sound, and it’s very much like somebody created a little teleportation portal, and you get to step into [the] time and place” in the video.

That’s compelling, and there’s little doubt that when consumers are able to experience this kind of thing themselves, they’re going to eat it up.

VR “is inherently a social platform because it is a digital communication system at its core,” said Anthony Batt, co-founder of the VR production company Wevr. “The Internet has taught us that computers are as much about communication as they are about computation. Therefore all the creative engineers and entrepreneurs are building the next Slack, Hangouts, etc. supported by new interaction design paradigms.”

Added Batt, “Of course, Facebook is way ahead of everyone on this because they have Oculus and one billion active users that will slowly get access to VR headsets. Their usage will demand interaction and communication in the social arena. I bet Facebook will innovate within VR on the social side to such a great effect that it will make users only want to use VR in the company of their friends, family and collaborators.”

For now, though, this is all in the prototype stage, and Facebook has no plans to let the public try these early social VR experiences—save for Toybox, which will ship with the Oculus Touch controllers—themselves. That’s because, Beltzner said, Facebook doesn’t know if these are the right experiences. But he did say that VR users should expect to see “more natively social VR aspects” this year.

It also indicates where all of this could be going.

“This move by Facebook…demonstrates that the applications for VR go far beyond gaming and entertainment,” Gasking said. “These immersive platforms will bring about a transition of how we experience the many tech applications we use on a daily basis. In the future, we’ll essentially walk into volumetric immersive applications, not just social apps like Facebook, but also e-commerce, real estate, dating, education, or any number of apps we consume on a flat screen today.”

Beltzner side-stepped the question, but said that perhaps the way to understand where the company is going with VR, and why it’s committed to making virtual reality social, is to look at how Zuckerberg, Schroepfer, and other company leaders saw the giant social network evolve from a text-based experience in its early years to one that is now dominated by images and video.

“That wasn’t accidental,” Beltzner said. “That’s about the level of immersion as opposed to describing” experiences. In other words, a picture—or video—is worth a thousand words. “So they saw the potential of VR as [offering] an even deeper sense of immersion, a deeper way of sharing.”

“They did the thing they do best,” he said. “They found the right people working [on these problems] and give them the resources” to go all the way.