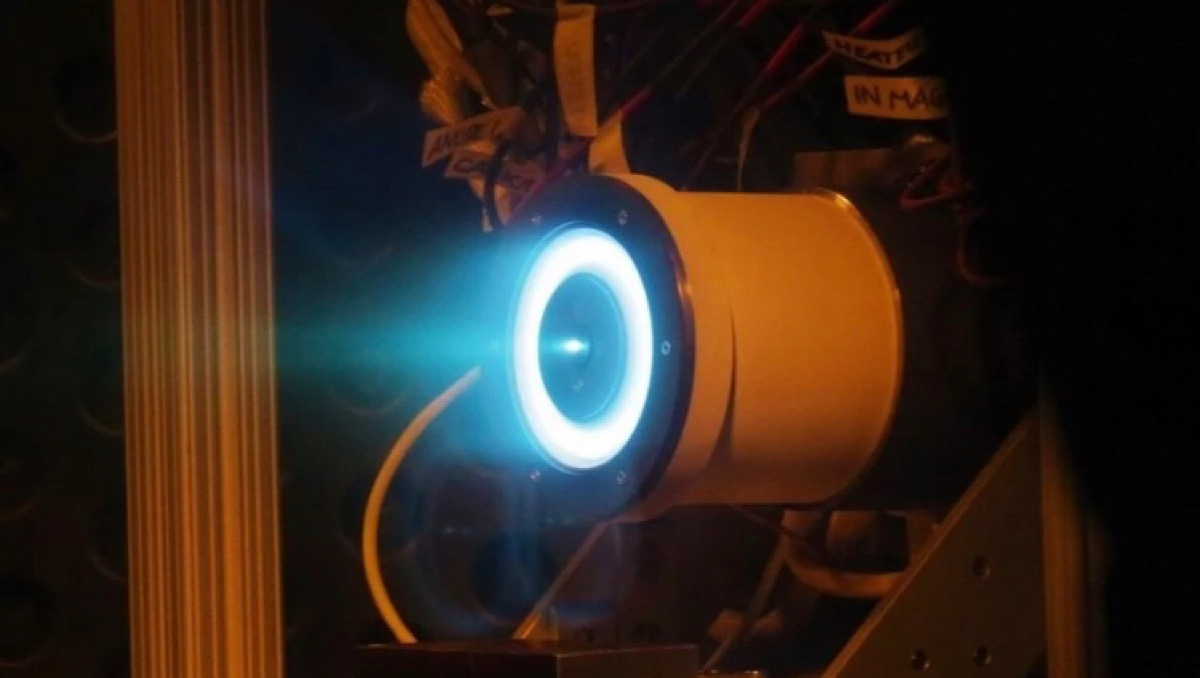 THE ‘HELICAL ENGINE’ WORKS BY EXPLOITING THE WAY MASS CAN CHANGE AT RELATIVISTIC SPEEDS. (CREDIT: NASA)

When it comes to space, there’s a problem with our human drive to go all the places and see all the things. A big problem. It’s, well, space. It’s way too big. Even travelling at the maximum speed the Universe allows, it would take us years to reach our nearest neighbouring star.

But another human drive is finding solutions to big problems. And that’s what NASA engineer David Burns has been doing in his spare time. He’s produced an engine concept that, he says, could theoretically accelerate to 99 percent of the speed of light – all without using propellant.
He’s posted it to the NASA Technical Reports Server under the heading “Helical Engine“, and, on paper, it works by exploiting the way mass can change at relativistic speeds – those close to the speed of light in a vacuum. It has not yet been reviewed by an expert.

Understandably this paper has caused buzz approaching levels seen in the early days of the EM Drive. And yes, even some headlines claiming the engine could ‘violate the laws of physics’.

But while this concept is fascinating, it’s definitely not going to break physics anytime soon. NASA has finished the system requirements review for its Mars Sample Return Program, which is nearing completion of the conceptual design phase. During this phase, the program team evaluated and refined the architecture to return the scientifically selected samples, which are currently in the collection process by NASA’s Perseverance rover in the Red Planet’s Jezero Crater.

The architecture for the campaign, which includes contributions from the European Space Agency (ESA), is expected to reduce the complexity of future missions and increase probability of success.

“The conceptual design phase is when every facet of a mission plan gets put under a microscope,” said Thomas Zurbuchen, associate administrator for science at NASA Headquarters in Washington. “There are some significant and advantageous changes to the plan, which can be directly attributed to Perseverance’s recent successes at Jezero and the amazing performance of our Mars helicopter.”

As such, the Mars Sample Return campaign will no longer include the Sample Fetch Rover or its associated second lander. The Sample Retrieval Lander will include two sample recovery helicopters, based on the design of the Ingenuity helicopter, which has performed 29 flights at Mars and survived over a year beyond its original planned lifetime. The helicopters will provide a secondary capability to retrieve samples cached on the surface of Mars. Recent file image of VIPER in the Lunar sand pit.

It faced the quicksand-like soil in the “sink tank,” climbed the “tilt bed,” and conquered boulders and craters. NASA’s Volatiles Investigating Polar Exploration Rover (VIPER) prototype recently endured the most realistic tests to-date of its ability to drive through the most difficult terrain during its mission to the Moon’s South Pole.

This MGRU3 features motor controllers specially designed for the Moon rover – a critical piece of hardware in the rover’s mobility system that controls the motors that send power the rover’s four wheels.

“Unlike most car engines, which uses a throttle and brake to speed up and slow down all four wheels, VIPER’s motor controllers make the rover wheels turn at the force and rate the drivers want, with extreme precision to allow for better performance,” said Arno Rogg, test director and rover systems engineer at NASA’s Ames Research Center in California’s Silicon Valley. “These tests allowed us to verify the performance of the rover mobility system and know it will work well on the Moon.” Artist’s concept of the prototype starshade, a giant structure designed to block the glare of stars so that future space telescopes can take pictures of planets. Credit: NASA/JPL

The field of exoplanet study has come a long way in recent decades. To date, 5,063 exoplanets have been confirmed in 3,794 systems beyond our own, with another 8,819 candidates awaiting confirmation. In the coming years, tens of thousands of more planets are expected to be found, thanks to next-generation observatories. The ultimate goal in this search is to find planets that are “Earth-like,” meaning they have a good chance of supporting life. This is no easy task, as rocky planets located within their parent star’s habitable zones (HZs) tend to orbit closely, making them harder to see.

To make this process easier, NASA is designing a hybrid observatory consisting of a “Starshade” that will block out a star’s light so that a ground-based telescope can directly image planets orbiting it. The concept is known as the Hybrid Observatory for Earth-like Exoplanets (HOEE), and NASA is looking for public input to make it a reality. To that end, they have launched the Ultralight Starshade Structural Design Challenge, where participants are asked to develop a design for a lightweight starshade structure that could be used as part of the HOEE concept.

The challenge is being hosted by GrabCAD, a Massachusetts-based startup that hosts a free cloud-based platform that helps engineering teams collaborate and manage, view, and share Computer-Aided Design (CAD) files. The NASA Tournament Lab is managing the challenge, which supports the NASA Innovative Advanced Concepts (NIAC) study of the HOEE concept. The challenge is part of NASA’s Prizes, Challenges, and Crowdsourcing program, overseen by NASA’s Space Technology Mission Directorate (STMD).

The process of turning water, carbon dioxide, and sunlight into oxygen and energy helps plants to grow naturally – and it’s a process that scientists are looking to harness and adapt in order to produce food, fuel, and more besides.

In a new study, scientists outline an experimental artificial photosynthesis technique, which deploys a two-step electrocatalytic process to turn carbon dioxide, water, and electricity generated by solar panels into acetate (the main component of vinegar). This acetate can then be harnessed by plants in order to grow.

In fact, the system that the researchers have designed here is intended not just to mimic the photosynthesis that happens in nature, but to actually improve on it – in plants, only around 1 percent of the sunlight’s energy is actually turned into plant biomass, whereas here the efficiency can be multiplied by about fourfold. Fission surface power systems – depicted in this conceptual illustration – could provide reliable power for human exploration of the Moon under Artemis. Credits: NASA

THE SPACE AGENCY AND THE U.S. DEPARTMENT OF ENERGY HAVE SELECTED THREE DESIGN CONCEPT PROPOSALS FOR A FISSION SURFACE POWER SYSTEM FOR A DEMONSTRATION ON THE MOON

NASA is one step closer to finalizing nuclear power some 238,900 miles away from Earth.

The space agency and the U.S. Department of Energy have selected three design concept proposals for a fission surface power system that would be stationed on the moon.

The hope is that a nuclear reactor would produce the power needed to operate rovers, conduct experiments and help support life.

Scientists say that the concepts for the technology will benefit future exploration under the Artemis umbrella and will be ready to launch by the end of the decade. NASA’s going to need new suits to accompany astronauts to the Moon for its Artemis I mission, and now we know who’s going to be making them: Axiom Space and Collins Aerospace. The two companies will develop next-generation suits that’ll be used both for spacewalks on the ISS, in addition to Moon exploration. NASA says it has defined the technical and safety standards around the new “xEMU” equipment (Exploration Extravehicular Mobility Unit), but it’s up to these partners to deal with “design, development, qualification, [and] certification” as well as building the necessary support equipment. Researchers from the National Aeronautics and Space Administration (NASA) have developed a novel hypersonic computational fluid dynamics code dubbed VULCAN-CFD and are using AI to optimize the tech.

The highly capable model named after the Roman god of fire can accurately simulate the behavior of combustion in turbulent airflows in engines operating at subsonic, supersonic, and hypersonic speeds.

A hypersonic missile travels at Mach 5 or higher, which is five times faster than the speed of sound (3836 mph), or about 1 mile per second. Such missiles are extremely destructive in nature as most of the currently available air defense systems, and anti-ballistic systems can not bring them down.

The major challenge that researchers face while developing hypersonic missiles is to make them travel at hypersonic speed without compromising the missile’s maneuvering capabilities. Developers need to analyze the air flows around the aircraft or weapon and its behavior as it passes through the engines and reacts with fuel, which is quite a tedious task. That is where NASA’s new tool comes into play. According to NASA, the spacesuit technologies are being tested for the upcoming Artemis missions on the Moon, which are set to take place in 2025.

NASA tests spacesuits for upcoming Artemis missions on the Moon.

The US National Aeronautics and Space Administration (NASA) has recently revealed that it is developing spacesuit technologies for future astronauts on the Moon. In a new YouTube video, the US space agency informed that astronauts onboard the International Space Station (ISS) are testing the new spacesuits with built-in water cooling systems in order to stay safe from Sun’s unfiltered rays. NASA has outlined its upcoming technologies in the clip titled “Keeping Cool in Space”.

“As NASA embraces commercial partnerships to optimize spacesuit technology as part of the Artemis program, the Spacesuit Evaporation Rejection Flight Experiment (SERFE) payload continues to be tested onboard the International Space Station,” NASA wrote in the caption of the clip. NASA has just announced the projects that will be getting money from its NASA Innovative Advanced Concepts (NIAC) programme, which aims to support ideas for game-changing mission designs and never-before-seen space exploration tech. Here we look at five of the concepts and how they will be used. NASA just greenlit the study of several futuristic tech concepts, including one that could let you breathe on Mars. The projects are part of the NASA Innovative Advanced Concepts program. The program wants to foster the exploration of tomorrow. As such, it has approved funding for early-stage studies on multiple types of futuristic tech, including new spacesuits and spacecraft designed to explore outer planets. This “selfie” was created using a specialized pupil imaging lens inside of the NIRCam instrument that was designed to take images of the primary mirror segments instead of images of space. (NASA)

A million miles from Earth, the James Webb Telescope has snapped its first selfie from orbit.

NASA released the self-portrait Friday, along with several mosaic images that the telescope captured while gazing at its first star. The images were taken as part of a monthslong process to assess the health of the observatory’s various mirrors and instruments.

Nearly 50 days after Webb launched into space, the photos are early indicators that it is functioning as expected and is ready to begin its mission.

“This amazing telescope has not only spread its wings, but it has now opened its eyes,” Lee Feinberg, Webb’s optical telescope element manager at the NASA Goddard Space Flight Center in Greenbelt, Maryland, said Friday in a news briefing.

But before Webb can begin capturing jaw-dropping images of galaxies, star clusters and planets, mission controllers need to be sure that the observatory’s huge primary mirror is properly aligned.

Measuring more than 21 feet across, its honeycomb-shaped primary mirror is designed to collect and focus light from objects in the cosmos. To fit inside its rocket for launch, however, the telescope’s mirror, along with several other components, were carefully folded up.

Over the course of several weeks, as the telescope journeyed to its final destination in orbit around the sun, it delicately unfurled. Each of the telescope’s 18 gold-coated, hexagonal mirror segments were moved into place.