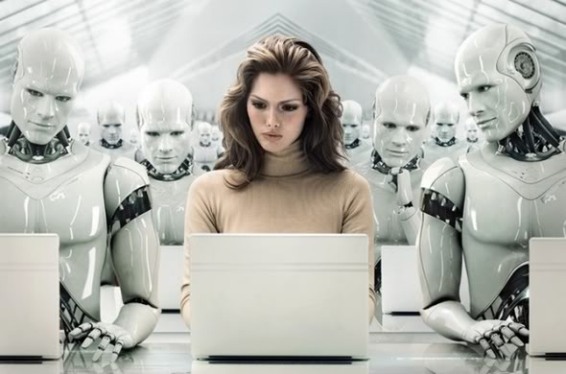 The robots are coming! They’ll be taking millions – maybe billions – of jobs away with them. Yoram Yaakobi, head of the Microsoft Israel R&D center, says not to worry.

“New technology will be bringing in as many jobs as the robots take, and then some. Some of the jobs that will be most in-demand jobs in a decade are jobs we have no conception of now. For example – big data deep divers.”

It’s a job that wasn’t possible before the era of big data, and would be impossible to do without robotics. It’s likely to be in high demand in the coming years, as the amount of data that is collected and needs to be stored explodes as a result of the spread of Internet of Things technology, said Yaakobi.

Yaakobi was speaking at Microsoft’s ThinkNext event last week, where the company shows off its best and brightest new technologies, many developed in Israel. Robots are one of the issues that give many people pause about technological progress. Just as previous industrial and digital revolutions hollowed out whole industries, from farming to clothes manufacturing, so the robot revolution will automate many of the service jobs that are currently the backbone of employment in the West today.

Already, said Yaakobi, the change has profoundly affected workers in “consumer facing” occupations, like bank tellers – many of whom have been replaced by enhanced automatic teller machines, which today do much more than just accept deposits and spit out cash.

And there’s much more on the way.

According to the World Economic Forum (WEF), robots will “rob” the economy of 7.1 million more jobs in the next four years, while at the same time creating 2 million more, for a net loss of some 5 million positions.

It’s all part of the “the Fourth Industrial Revolution, which is interacting with other socioeconomic and demographic factors to create a perfect storm of business model change in all industries, resulting in major disruptions to labor markets. New categories of jobs will emerge, partly or wholly displacing others. The skill sets required in both old and new occupations will change in most industries and transform how and where people work,” said the WEF.

As with most social change, the scariest thing is not knowing how things will turn out. Professor Zvi Shiller, a professor at the Department of Mechanical Engineering and Mechatronics Faculty of Engineering Ariel University and chairman of the Israel Robotics Association, said: “We cannot tamper with the development of technology, and even if we try it will be to no avail, because once started, technology revolutions cannot be stopped. There are no established paradigms for how society is going to handle large numbers of people who will not have work.”

One answer that’s feasible for a tech economy like Israel’s, at least, is to become a leader in robotics technology, thus maximizing the benefits to the economy of the robot revolution and maximizing the number of jobs in the economy.

Still, said Shiller, there is going to be a lot of collateral damage. “There are certainly going to be many people who are not going to be able to adapt to the new economy, and for them, I believe that the government has a responsibility to help.”

The theme of government responsibility was also on the agenda at a meeting of the Knesset Science Committee, which recently “hosted” a robot during a discussion on the changes Israel can expect in the robot era.

Some Knesset members, such as committee chairman Uri Maklev, see the robotic revolution as a positive thing.

“Robot technology is one of the most important technologies being developed,” said Maklev after the robot (which consisted of a computer mounted on a suit of clothes) made a text-to-voice speech about the future of robot technology.

“There will be many benefits to society,” said Maklev. “Today, it takes five workers to take care of an ill patient in a nursing home or hospital, but in the future we will be able to make do with one worker.”

What will happen to those other four workers? They will have to be trained for some other occupation, said Maklev. But what kind of work could nurses aides, food service workers, and other relatively low-skilled service personnel be trained for? Several MKs, including Aliza Lavie and Manuel Trachtenberg, called on the government to “take control” of the robot revolution, and offer intensive retraining options to displaced workers, as well as advanced technology training to students.

But according to the robot – who turned out to be Dr. Roey Tzezana, Futures Researcher at the Yuval Ne’emanWorkshop, Tel Aviv University (the robot voiced his comments and showed his image on a screen), there’s probably little society can do to minimize the loss of jobs.

“Historically, not all professions that are lost due to technological advancements are replaced with something else,” he said. “As many as 40% of current job titles are in high danger of disappearing soon.”

But there’s more to this story, said Yaakobi. “I recently came across a presentation by Thomas Frey (Senior Futurist at the DaVinci Institute and Google’s go-to futurist) who discussed the 162 jobs of the future that don’t exist today. He makes a pretty good case.”

As many jobs that are lost will be created, said Yaakobi – and there will be plenty of opportunities for individuals who are flexible and can adjust to the changes in the economy and technology.

The problem is what will replace those jobs taken over by robots. But thanks to new technologies like big data, IoT, augmented and virtual reality – and robots themselves – there will be plenty of new jobs to replace the old ones, according to Frey. A former IBM engineer and author, he has become one of the leading voices offering reassurance on how the future will play out.

“Predicting future jobs is an exercise that involves looking at future industries and speculating on ways in which they will be different than the workforce today,” according to Frey. “Business management, engineering, accounting, marketing, and sales are all necessary skills for the future, but the work involved will also be different. At the same time there will be many less-obvious positions that will need to be created.”

Frey’s list of the 162 Future Jobs “is about those less-obvious positions.”

Among the jobs Frey describes is a Data Hostage Specialist. “We’re already seeing this happen,” said Yaakobi. “Hackers manage to get control of a computer and threaten to wipe out the data unless they are paid a ransom. Individuals who are able to protect the data and prevent it from getting harmed will be in great demand – and data protections is already an industry that suffers from a severe lack of personnel.”

Another good example of a future job that simply does not exist now is Augmented Reality Architect. “Virtual and augmented reality applications and devices are going to be standard in most homes and offices in the coming years, and someone is going to have to supply the scenarios for the applications to be used with those devices,” said Yaakobi.

That could include, for example, an expert who can translate the examples used in a third-grade math textbook to a VR/AR scenario. “You have to make things look and feel realistic in order to make the scenario convincing. As more people spend more time with VR and AR applications, this job will become even more important.”

Then there’s Yaakobi’s favorite – Big Data Deep Diver. “Already, we at Microsoft are experimenting with storing big data servers underwater, where the ocean water cools down the temperature of the server. It makes sense, as it obviates the need to use electricity to cool down a data center with air conditioning. But what happens when something goes wrong with the communications with that server – when a technician has to go down with tools or a software update that needs to be applied manually, or when there is a security breach?

“For that you need two skill sets – engineering and scuba diving. The diver will need to go underwater and use robotic tools to repair hardware, or to reach components inside the server in order to add software modules.,” said Yaakobi.

As big data storage grows at an exponential rate, thanks to the huge volume of data that IoT devices will collect, the number of underwater servers will grow sharply – as will demand for scuba-diving engineers.

“Then there are time hackers,” said Yaakobi. “I don’t know what that is, but if it gives me more time to do stuff, then I need it.” (According to Frey, “If we think cyber terrorists are a pain, it will seem like nothing compared to devious jerry-riggers who start manipulating the time fabric of our lives”).

And the future is now, said Yaakobi. “Many of these jobs surround big data, IoT, and robots, all of which are subject to hacking – which means that as those technologies grow, there will be a greater need for cyber-security experts,” said Yaakobi. “In 2014, over a billion data records were stolen by hackers from servers, and the average cost to companies that year for data breaches was $150 million. Both the theft of records and the cost of remediation is only going to increase – and by 2019 alone, our figures show that the US alone will need two million more cyber-security experts. If that is not a job of the future, what is?”