The MDASat will be an operational constellation of nine cube satellites that will detect, identify and monitor vessels in near real-time, in support of South African maritime domain awareness.

The launch of the first three satellites (MDASat-1) follows three years after the launch of the most advanced South African nanosatellite to date, ZACube-2, which was developed as a technology demonstrator for the MDASat constellation.

“Since its launch in 2018, ZACube-2 has been providing cutting-edge very high frequency (VHF) data exchange communication systems to the country’s maritime industry, as a contribution to Operation Phakisa,” Nzimande said.

The minister said his department had invested R27 million over three years in the development of the MDASat constellation. Called ILO (Identified Levitating Object), the conceptual project, having a static base, consists of a levitating station that can move around with its self-generated energy, collected from the wind and the sun. NASA’s DART spacecraft is supposed to change an asteroid’s orbit by crashing into it going 6 kilometers per second.NASA/JOHNS HOPKINS APL

In the name of planetary defense, NASA is set to launch a robotic probe next week that in late 2022 will hurtle into a sizable space rock in the hopes of nudging its orbit. Although the celestial target of the Double Asteroid Redirection Test (DART) poses no danger to our planet, the mission will assess the feasibility of deflecting potentially hazardous objects away from Earth.

“DART is such a fricking cool mission,” says Peter Schultz, a geologist at Brown University who studies impacts in the Solar System. The $325 million mission may launch as early as 24 November on a SpaceX Falcon 9 rocket from Vandenberg Space Force Base in California. Our planet is vulnerable to thousands of “city-killer” space rocks. If—when—one is found on a collision course with Earth, will we be ready to deflect it?

Back when Andy Rivkin was in college, he had a few friends in medical school. “I was like, oh man, I don’t want do anything that has too much responsibility,” he says. Instead, he looked to the stars. “Astronomy seemed pretty safe.” And, for a while, it was. Rather than having to make decisions about someone’s root canal or abdominal surgery, he watched worlds flit about in the darkness.

But Rivkin, a planetary astronomer at the Johns Hopkins University Applied Physics Laboratory (APL) in Baltimore, has found himself with more responsibility than he expected. Along with hundreds of others, he is part of the Double Asteroid Redirection Test (DART) mission, an ambitious effort led by NASA and the APL to slam an uncrewed spacecraft into an asteroid to change its orbit. This is a dry run for the real deal: one day, a technological descendant of DART could be used to deflect a planet-threatening space rock, saving millions—perhaps billions—of lives in the process.

On November 23, DART will launch on a SpaceX Falcon 9 rocket from California’s Vandenberg Space Force Base. Sometime next fall, it will smash into its target at 24,000 kilometers per hour. Ground-based astronomers like Rivkin will watch the rendezvous unfold with bated breath, hoping to see the telltale signs of success: a dust cloud, and an asteroid dancing to humanity’s tune for the very first time. Will it work? Northrop Grumman will design the electric and autonomous Lunar Terrain Vehicle (LTV) for NASA’s Artemis astronauts, who are due to land on the moon in 2025, a press statement reveals.

The aerospace and defense firm announced a partnership with AVL, Intuitive Machines, Lunar Outpost, and Michelin to work on the project, which will help to take humans to the lunar south pole for the first time in an expedition that could uncover ice and water resources for future missions. SpinLaunch, a startup working on a kinetic space launch system, has successfully completed its first prototype flight. It’s a major milestone for the seven-year-old company as it works toward a test of its full-scale system.

The concept behind that system is pretty wild: Essentially, SpinLaunch wants to get to orbit by using a large, vacuum-sealed chamber and a hypersonic tether to spin a spacecraft at a high enough velocity — up to 5,000 miles per hour — to escape the atmosphere. That means no rocket, no rocket engines. It’s a markedly different way of thinking about spaceflight, much more akin to a giant rail gun rather than a conventional launch system.

According to SpinLaunch, such a system is now possible thanks to advances in small electronics and high-strength materials like carbon fiber, which can harden both the launch vehicle and small satellites to high-G forces. In addition to the Artemis project, which NASA introduced last year, it will shed light on today’s problems with the Wi-Fi it will create on the Moon.

The Artemis program, introduced by NASAlast year, aims to land a human on the Moonfor the first time since 1972. Another detail about this exciting operation has emerged. According to the study, which we have just learned to be developed, NASA aims to fluctuate Wi-Fi signals on the Moon for many purposes. 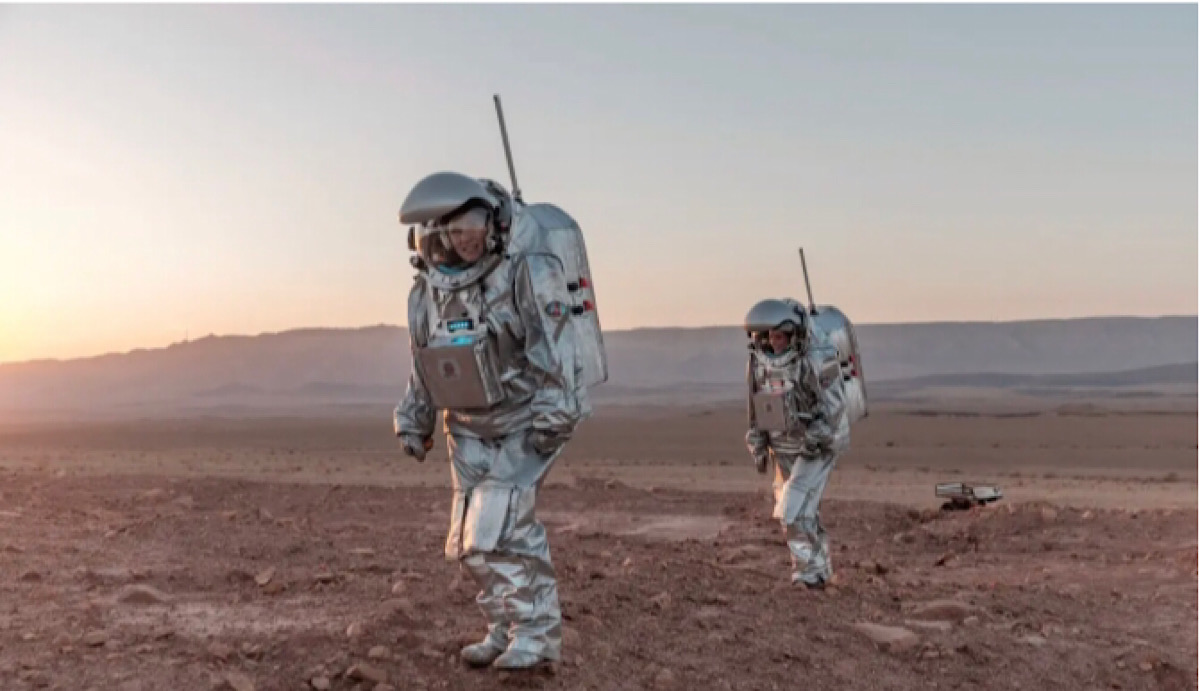 A group of “analog astronauts” will spend four weeks on a simulated version of Mars to prepare for the challenging environment on the Red Planet.- Advertisement –

The mission, hosted by the Israel Space Agency, will take place in the Negev desert, and will be managed by ‘Mission Control’ at the Austrian Space Forum with a 10-minute delay to simulate the time difference between Mars and Earth.

They will be placed in a habitat similar to the design astronauts will use on future missions to Mars. Geologically, the composition of the Negev Desert is very similar to that of Mars, making it an ideal setting for testing practices, the researchers say.

“This is our first mission where our analog astronauts will live and work completely independent in their habitat for three weeks. A small on-site support team is available for technical problems and maintenance,” said Dr. Gernot Grömer, director of the Austrian Space Forum. but will not be allowed to interact with analog astronauts.

The simulation, known as AMADEE-20, will see five men and one woman wearing “detailed space suit prototypes” as they step outside or drive the rover. Nasa has announced plans to send a spacecraft hurtling into an asteroid at 15,000mph to change its path in the US space agency’s first “planetary defence” test.

The mission, known as a Double Asteroid Redirection Test (DART), will be the Nasa’s “first use of the kinetic impactor technique” in which “a large, high-speed spacecraft is sent into an asteroid’s path to change its motion”, reported CBS News.

Nasa has called the mission “the first test for planetary defence”, and will send the spacecraft on a collision course “to hit the binary near-Earth asteroid Didymos and its moonlet, Dimorphos” on 24 November.

The mission will “assess if it is possible to divert an incoming celestial body”, The Telegraph said, in the hope that we can “avoid a mass extinction event like the one that wiped out the dinosaurs, and most life on Earth, 66 million years ago”.

Scientists have already identified at least 26,000 “near-Earth objects”, 4,700 of which meet Nasa’s classification as “potentially hazardous objects”. These are objects in space that are “larger than 500ft across, pass within 4.7 million miles of the planet, and would cause devastating damage if they hit” the Earth, the paper added.

The Didymos system, the target for the DART demonstration, is made up of two bodies. Didymos, the primary body, is roughly 780 metres across according to Nasa, while its moonlet is about 160 metres in diameter. The space agency hopes to hit the moonlet, which is “more typical of the size of asteroids that could pose the most likely significant threat to Earth”. The End-of-Life Services by Astroscale-demonstration (ELSA-d) mission was launched in March, with the goal of validating the company’s orbital debris removal tech. The demonstrator package, which was sent up on a Soyuz rocket that launched from Kazakhstan, included two separate spacecraft: a “servicer” designed to remove space junk, and a “client” that poses as said space junk.

“A major challenge of debris removal, and on-orbit servicing in general, is docking with or capturing a client object; this test demonstration served as a successful validation of ELSA-d’s ability to dock with a client, such as a defunct satellite,” the company explained.

The demonstration today showed that the servicer — a model of Astroscale’s future product — can successfully magnetically capture and release other spacecraft. Concept: China’s space exploration startup Origin Space has launched a robot prototype ‘NEO-01’ into low orbit Earth with a large net that can scoop up debris or waste left behind by other spacecraft. The 30kg robot was launched alongside other satellites on the Chinese government’s Long March 6 rocket. The aim is to forge new paths to the future of technology capable of mining elements on asteroids. When searching for signs of life on other planets, scientists say caves are a crucial place to look. But how can a team on Earth effectively explore intricate, dark, unfamiliar landscapes on another world?

Caves are one of the most likely places to find signs of both current and past life on other planets because they are capable of protecting life from cosmic rays and extreme temperature fluctuations around our solar system. A NASA project called BRAILLE is now working on exploring Mars-like caves that already exist on Earth in order to hone key technologies for future missions.